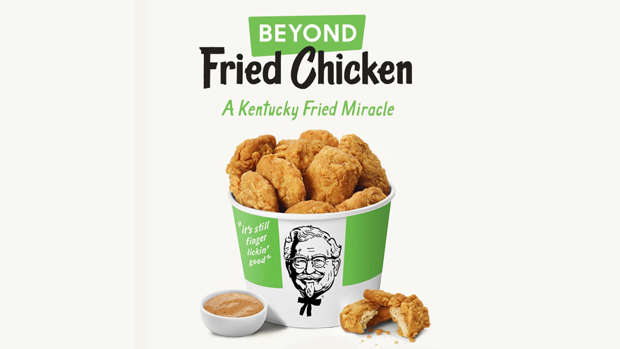 KFC has revealed that they are set to release a 'vegan chicken'.

The fast food chain in the US announced that they would be trialling their meat-free alternative chicken in Atlanta, Georgia from tomorrow (August 27) onwards.

It’s Kentucky Fried Chicken but it’s made with @BeyondMeat. It’s confusing, but it’s also delicious. Feast on these Kentucky Fried miracles tomorrow while they last at KFC in Atlanta, Georgia. pic.twitter.com/lC5oYM1cmk

The 'vegan chicken' is being called 'Beyond Fried Chicken', referencing the partnership with Beyond Meat - a fake meat company who entered the market earlier this year.

According to Buzzfeed, the fast-food outlet will offer Beyond Fried Chicken in two ways. Once as a nugget with a dipping sauce, and another as a boneless 'wing' with either Nashville Hot, Honey BBQ or Buffalo sauce.

The chicken is reportedly 100% plant based, but the fast-food restaurants will still prepare it in a fryer which also cooks actual chicken - so vegans, be aware!

No word yet on whether we'll get the vegan chicken in Aotearoa, but we're not too sure on the alternate meat situation just yet...