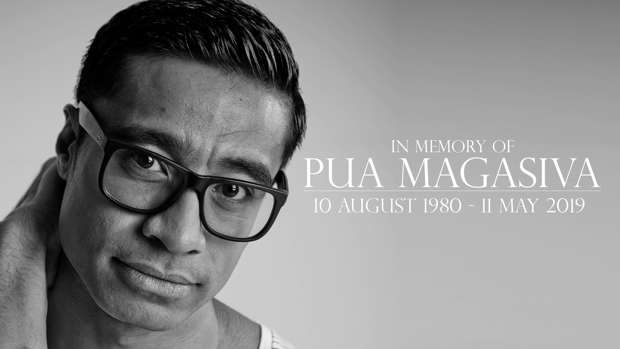 Tributes have been sent from far and wide following the passing of actor and our brother Pua Magasiva.

Pua passed away in Wellington over the weekend at the age of 38.

The Wake Up Call with Daz & Ast dedicated their show to Pua this morning, who was affectionately known by many of his mates as Pooz.

The boys asked our boss man Hayden to share some of his memories of Pua with our Flava whānau.

Pua's former co-host on Flava and close mate Sela Alo shared his thoughts on social media, saying that he was "struggling to come to terms with the news".

Hey Pooz I’ve been really struggling this weekend and couldn't bring myself to post or write anything sole, but I just had to. I’m gonna write to you again soon, but I just had to tell you something. Have you seen the amount of love people have for you?😊Do you know how many lives you’ve touched with your stink jokes, your stink charm, your stink handsomeness and your stink haircut??🤦🏽‍♂️Have a look through our timeline Pooz – actually have a look through anyone’s timeline and I bet you, you’ll see YOU – smiling next to someone, laughing with someone, standing side by side with someone! Man, I was like – how the heck does someone know this many people?😳You’ve taken more photos with people than Michael Jackson!🕺🏽 People love you uce! And they miss you… so so much! I wanna punch you in the pants right now but I also wanna hug you and hold you…I need to share some things about how I’m feeling soon, but for now, on behalf of the thousands of hearts you’ve made smile….we love you…God Bless, talk soon.❤️🙏🏾❤️ Sela

Tarsh Ieremia posted to Instagram and shared a video of Sela and Pua mucking around in the Flava studio, saying that she would "love to spend one more morning to hear Pua's classic laugh.

I put up with this every morning🙄...But I would love to hang with you for just one more morning, to hear this laugh. 😥 The laugh that’s comforting me and making me smile right now. You drove me insane when I was trying to be serious, always ate and spoke (at the same time) in our meetings, loved a good prank, asked the most inappropriate questions and had the most wonderfully, creative ideas. You have left so many broken hearts behind Poo’s. I always told you I loved you...but I wish I told you how much you meant to me and my family. You were loyal and protective of those you loved - I just wish I could’ve protected you. I miss you so much xo

Current host of The Wake Up Call Ast has also taken the time to digest his thoughts on Pua's passing and shared them on his Instagram account.

I’m sad, I’m so fricken sad 💔 . Finally had some time to digest what has happened & do my best to find some words to describe how I’m feeling about the loss of a friend . Pua was a guy who could light up a room with his smile & infectious laugh. He was a bloody clown & I loved that about him, always looking to entertain people & put a smile on their faces, I respected that. I never felt like he was too busy to talk & would always give you the time of day if you needed it. . Pua gave us so much of his life & his energy, my heart is so sad knowing that he isn’t around anymore. My thoughts go out to his fans, his friends, but most importantly, to his family. I can’t even imagine what they are going through 😔 . This is a serious issue in our country & I hope that from this tragedy we learn that people aren’t always as strong as they appear, that underneath the smile they might be hurting. We don’t know people’s circumstances or what they are going through in their lives. People’s mental health is so precious & fragile, it’s our responsibility to breed a culture of understanding & openness about the subject. No more man, this hurts way too much . Rest in love @pua_magasiva you will be missed ✨

Friends and fans of Pua have taken to social media to share their memories and messages for him.

Kiwi actor Shane Cortese, who also appeared on Shortland Street, shared his support on Twitter for Pua's whānau saying that his heart went out to them.

My heart goes out to the Magasiva family and the extended television alumni who had the honor of seeing the glint in his eye and the sound of his hearty laugh close hand.
RIP my friend #puamagasiva @ShortlandTweet

Olympian Dame Valerie Adams sent her thoughts and prayers for Pua's whānau and friends, also posting to her Twitter account.

Rest In Peace Pua Magasiva. Thoughts and prayers to the family. ❤️ https://t.co/cGPJFwwTie

R&B artist Vince Harder wrote to social media: "No words uso, praying for your family at this time. Rest in love.".

Singer Sammy J also took to Instagram to send his condolences, saying that Pua was the first person to interview him.

You were the first person to ever interview me, I remember I was so green and nervous and you helped me find my own voice when it came to interviews simply by allowing me to be as weird as I was lol even as ur career progressed u always had time for me you always checked in on to see how the music was going.. it makes me sad.. maybe I should have checked in on you... you’ll be missed Pua..till we meet again ❤️ this needs to stop in our Polynesian community..if you aren’t feeling okay.. I’ll talk to you. No one should ever feel like there’s only one option out.

Pua is set to be farewelled at a private funeral ceremony later this week in Wellington.

His family today confirmed that the much loved father, son, husband and friend would be farewelled during a "private funeral ceremony for Pua's family and close friends in Wellington at the end of this week".

"The family have requested that the public and media respect their privacy at this time," a spokeswoman said.