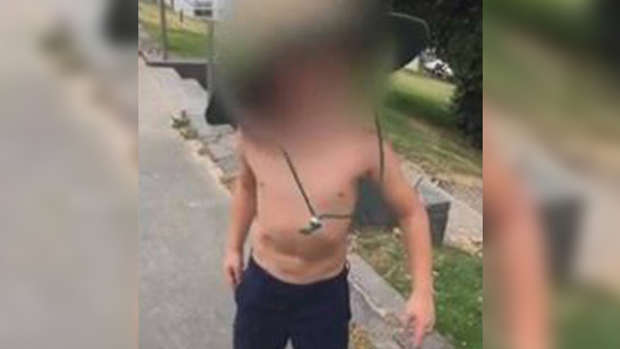 Disturbing footage has emerged of Irish tourists dumping rubbish and empty alcohol bottles on Takapuna Beach - then threatening to "knock the brains out" of locals who challenged their behaviour.

On Sunday afternoon approximately 12 tourists from one family showed up to Takapuna Beach to enjoy a day out, but as they were leaving they left behind a hefty amount of rubbish on the reserve.

Check out the video here:

Disgruntled beachgoers challenged the family and asked them to pick up their rubbish, but the tourists allegedly turned violent and threatened to punch locals in the face.

Witness Krista Curnow told the Herald the family of tourists surrounded her and shouted abuse while footage from the incident shows a young boy shouting "I'll knock your brains out".

"The young boy in the video came up to our group and emptied his bag of chips on our blanket, before laughing and ran away," she said.

"Later on, the family packed up and left all their rubbish on the reserve. We were thinking 'are you serious'?

"We asked them if the were going to pick up their rubbish and they said they weren't coming back. So I followed them and I said 'hey don't come to our country and disrespect it like that way'.

"Their response was basically if we have a problem then we can pick it up and that that's what the council is for.

"That's when they started getting quite violent. About four or five ladies stood around me in a half circle. They were saying they were going to hit me and I started walking backwards to get out of it.

"They turned violent and even grandma and the child got involved saying they wanted to punch my head in."

The little boy in the video then started swearing and getting aggressive, coming up to Curnow and her friends saying he was going to "knock your brains out".

As the family were leaving the beach, Curnow attempted to take a photo of their number plate, sparking the driver into a rage where he attempted to run her over and steal her phone, he said.

"He drove up onto the kerb towards me and he jumped out of the car and tried to take my phone. A bystander jumped in and told him to calm down.

"They drove off with their boots up, trying to hide their number plates."

The group were described as "gross" and allegedly were spitting on the ground while at the beach.

The aftermath shows boxes of beer bottles dumped on the ground along with bits of plastic, rubbish and a bag full of junk.

items of clothing were also left on the reserve.

Curnow said she stood up to the family because no one should put up with the mess they made and didn't want to let tourists disrespect our country.

She also accused the family of drinking and driving.

"We live in one of the most beautiful countries in the world, how dare people come to New Zealand and disrespect our country, this is our home.

"The rubbish was one thing, but drinking and driving with their babies in the car just topped it off. And the mouth on that young boy - absolutely disgusting! What kind of role models are the parents allowing this sort of behaviour.

"Though I loved how everyone else on the beach came to support and we all picked up the rubbish together."