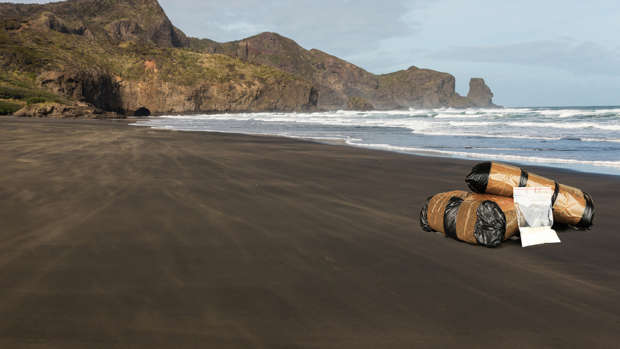 More than $3 million of cocaine has been found washed up on Bethells Beach in West Auckland.

Police have been out at the scene since last night sweeping the area for drugs and have found 19 packages so far.

The New Zealand Herald understands the packages, contained in netting, were found by locals out walking. Each package was about the size of a VHS tape and wrapped tightly in plastic.

A source said the presence of shells on the netting indicated the packages were out at sea for some time.

"It is believed the amount found would have a street value of approximately $3 million dollars.

"Police with the assistance of NZ Customs have conducted a thorough search of the beach and surrounding areas in an effort to locate any further packages.

"There is a small possibility that further packages may turn up on the beach and we ask any members of the public to contact us immediately if they do."

Parmenter said the police Eagle helicopter will be in the area today conducting a search of the wider area.

"And we will be sending regular patrols in the coming days to continue to check for further washed up items," he said.

"Our inquiries are ongoing to identify where these drugs have come from.

"Anyone with information is asked to contact Waitematā Crime Squad on 09 839 0697.

"Alternatively, information can be provided anonymously to Crimestoppers on 0800 555 111."

It is not the first time significant amounts of drugs have been located on Kiwi beaches.