It's only day two of New Zealand's lockdown, but many Kiwis are probably already missing their fast food fix.

Instead of resorting to boring chicken drumsticks that have been bought from the supermarket, this is the perfect time for people to try to make their own KFC dinner.

Even though the original recipe has been closely guarded since the 1940s, the Chicago Tribune published what it claims to be the secret recipe found in an old scrapbook belonging to one of the Colonel's relatives in 2017.

Stuck inside an envelope in the scrapbook is a handwritten note with the recipe alongside Claudia's will.

Claudia passed away in 1997 so cannot confirm the authenticity of the note.

When asked if he thought it was the original recipe Joe said: "Yeah, I do."

"I don't want to get in an argument with [KFC's parent company] Yum! Brands about it but ... I'm pretty sure that it's pretty close to the original."

Decide for yourself and give the recipe a go.

(As published in The Chicago Tribune)

Mix the flour in a bowl with all the herbs and spices; set aside.

2. Mix the buttermilk and egg together in a separate bowl until combined. Soak the chicken in the buttermilk mixture at room temperature, 20-30 minutes.

3. Remove chicken from the buttermilk, allowing excess to drip off. Dip the chicken pieces in the herb-spice-flour mixture to coat all sides, shaking off excess. Allow to sit on a rack over a baking sheet, 20 minutes.

4. Meanwhile, heat about 3 inches of the oil in a large Dutch oven (or similar heavy pot with high sides) over medium-high heat to 350 degrees (175C). (Use a deep-frying thermometer to check the temperature.) When temperature is reached, lower the heat to medium to maintain it at 350. Fry 3 or 4 pieces at a time, being careful not to crowd the pot. Fry until medium golden brown, turning once, 15-18 minutes. Transfer chicken pieces to a baking sheet covered with paper towels. Allow the oil to return to temperature before adding more chicken. Repeat with remaining chicken.

Last year, KFC ran cooking workshops for 3000 special guests in the UK who won a prize to discover the secrets for cooking the world's most iconic fried chicken.

They were taught the step-by-step process of making their juicy burgers and signature bits of chicken.

The chefs at KFC begin with a mixture of raw, on-the-bone chicken thighs, drumsticks and wings.

Cuts of rib and keel are also used in the famous sharing buckets, however, they're a bit harder to find in a standard supermarket.

The way you must coat the chicken is said to be very specific.

Begin by filling a large tray or bowl with the flour and spice mix.

Toss the chicken through the mix - scoop it underneath and then fold it over to ensure no part misses out on being coated. 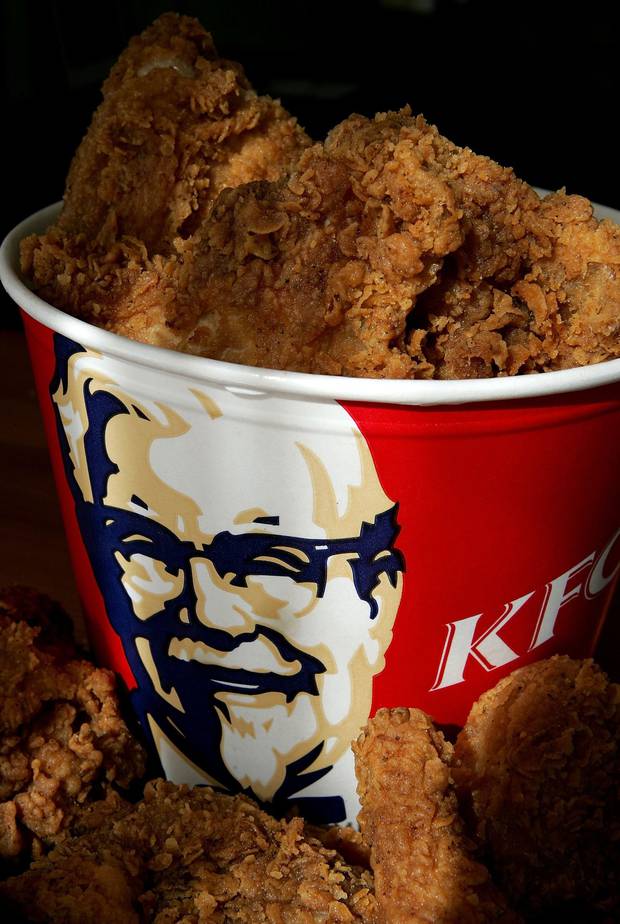 KFC coats its chicken in in a very precise way. Photo / Getty Images

Then, apply pressure to the chicken with both hands so the flour sticks.

Remove the chicken pieces, two at a time.

As the pieces are removed, shake off the extra coating and then tap the bits together.

Stop the meat touching by simply knocking your thumbs.

The bits of thigh and wing are now ready to go on the oven tray, but the drumsticks need a second coating so the skin can become super crisp.

Hold the bottom of the drumstick and twist it to the top so extra air can be released.

The process takes 20 minutes, with 15 for frying and five for draining excess oil.

No deep fat fryer, no worries. Just heat up a lot of oil in a large saucepan to mimic the effect.

Then, you'll have legitimate KFC fried chicken cooked from the comforts of your own home.