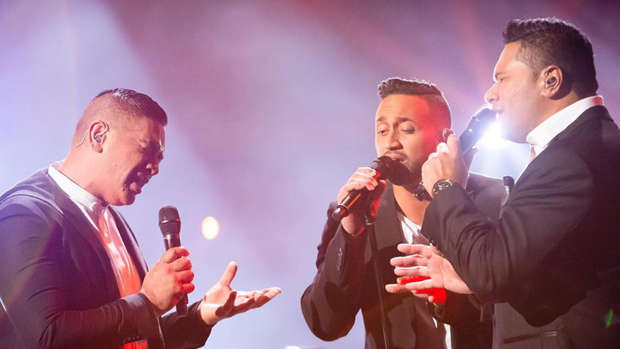 The Koi Boys are back and they're singing their way to success on the popular reality television show, The Voice Australia, with their powerful performance of The Beatles' Let It Be.

The Kiwi trio - made up of Nuz NgataiNgahere "Nuz" Ngatai, Kevin Keepa and Danny Faifai - brought Delta Goodrem to tears as they dedicated the song to the victims of the Christchurch terror attack.

The emotional tribute of the Beatles classic was performed in a Battle showdown against Daniel Shaw.

Speaking in rehearsals, The Koi Boys revealed why they wanted to dedicate the performance to the victims, with Danny saying: "It's a pretty dark place in the world right now, in light of what's happened back home in New Zealand, an absolute tragedy there in Christchurch."

"We were actually there when it happened," Nuz revealed.

"This song, we can dedicate it to the families and the communities that were affected …" started Danny.

"For everyone back home," agreed Kevin.

The boys, who are based on the Gold Coast and have been singing together for over a decade, originally shot to fame on the show with their smooth rendition of the 1954 hit Sh-Boom by The Chords.

They are now appearing in an All Stars series of The Voice Australia, which brings back past contestants of the show who came close to winning.