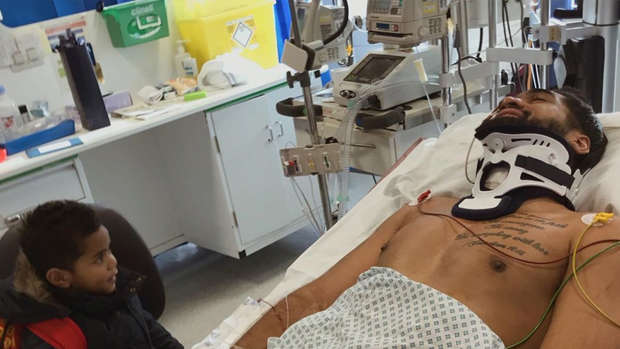 Former Hurricanes player Michael Fatialofa has been left with "damaged function, feeling and control over his body" after suffering a serious spinal injury during a rugby game.

The 27-year-old lock, who currently plays for the Worcester Warriors in the English Premiership, has been released after spending four weeks in a London hospital following a serious injury during a match.

He is now in a specialist spinal injuries clinic at the Royal Buckinghamshire Hospital in Aylesbury.

According to the Warriors, Fatialofa is making "good progress" but the injury has left him "facing damaged function, feeling and control over his body and a long period of rehabilitation and recovery".

A fundraising campaign has been set up by the Rugby Players' Association's Restart Charity for Fatialofa and his wife, Tatiana, to help with any immediate and future expenses.

GLORY TO GOD ☝🏽 We are so excited to now be at the spinal rehab clinic! Just one month ago the trajectory of our life was forever changed after my darling husband sustained a spinal cord injury doing what he loved most - playing rugby 🏉 The past 4 weeks have marked us in ways we may never be able to articulate, but we pray our story imparts something of true positivity & purpose to all you beautiful people backing us on this long road to recovery. The support has been overwhelming but certainly not unnoticed, thank you everyone! ⠀ @michaelfats I’m in AWE of you — your unwavering character and strength is without rival! I’m so blessed to bear witness to a testimony as powerful as yours. The real grind is only beginning, but greatness is your portion baby #PHASETWO

The Warriors have thrown their support behind Fatialofa and the fundraising campaign, and have covered the costs of his private hospital care.

"Since Michael suffered his injury there have been so many offers of support from across the rugby community," Warriors' co-owner Colin Goldring said.

"We have been working closely with Michael and Tatiana the RPA and their Restart initiative , the RFU Injured Players Foundation, Pacific Rugby Players, New Zealand Rugby Foundation, the New Zealand Rugby Players Association and Esportif, Michael's management company, to produce a co-ordinated plan to provide Michael with the best possible support.

"As an established charity which already provides support for seriously injured professional players, Restart was best-placed to provide co-ordinated support for Michael in the short, medium and long-term.

The latest on @michaelfats as we support @theRPA fundraising campaign ⬇️

Tatiana, who has been supporting her husband since the incident, said she has been humbled by the support.

"As a family, we appreciate any help people are willing to give at this difficult time. It is very humbling and well outside of our comfort zone to reach out and ask for support in this way," she said.

"We would love to thank everyone in advance, and feel so overwhelmed already by the generosity, prayers and kindness Michael and I have been shown. Together, we can all ensure he has the best chance of regaining independence and living a fulfilling life again."

Donations to support Michael Fatialofa can be made at: justgiving.com/campaign/michaelfatialofa