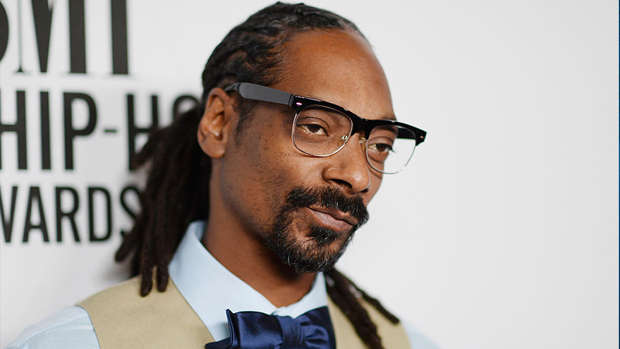 Snoop Dogg has dropped something new - but it's definitely not what we'd expect!

Snoop has released his first cookbook and according to NZ Herald reporter Chris Schulz, who reviewed the cookbook, some it's contents are ridiculously extravagant.

Bacon. It's salty and fatty and crispy and crunchy. It's an entire food group all on its own. The smell of a few rashers frying has turned many a vegetarian into an instant carnivore over the years. Including me.

But plain old bacon isn't good enough for Snoop Dogg. The rapper's recipe, detailed in his new cookbook From Crook To Cook, is bacon reincarnated. It is bacon 2.0. It is the kind of bacon you expect a multi-millionaire gangster rapper to eat.

Here's how you make it. Take a packet of streaky bacon. Smear each slice in a thick layer of brown sugar and black pepper. Bake until they resemble burnt-to-a-crisp tyre strips. Then eat them. That's it. As is.

Be warned: this isn't the only recipe in From Crook to Cook that deserves its own advisory from the World Health Organisation.

If that was Snoop's breakfast, here's one of his lunch offerings: chicken and waffles. Take crunchy pieces of deep fried chicken, stack them on top of multiple waffles, cover them in giant lumps of butter, then drown it all in maple syrup.

Snoop's advice? Use potato chips in the fried chicken batter. He calls it "Snoop's shake and bake."

Yes, you might have noticed the Compton OG is in hilarious form here. The weed-loving rapper is clearly riding this food wave for as long as he can. His ridiculous self-portraits in a tightey-whitey singlet are worth the admission price alone. If you've ever seen one of Snoop's cooking shows with Martha Stewart - who endorses this as a "one of a kind cookbook" - you already know what you're in for.

There are copious weed references - although, surprisingly, few recipes call for a touch of the green stuff. There are two recipes for gin and juice. There's another called a "Wake 'n' Bake Corpse Reviver". There are several pages dedicated to Snoop's favoured candies, Starbursts and Twizzlers. His Go Shorty, It's Your Birthday Cake recipe includes seven - yes, seven - cups of sugar.

Some recipes look like they won't cause permanent heart damage. As Snoop warns: "I don't just be smokin' green, I drink my greens, too." Some real thought has gone into recipes you might actually cook. The Soft Touch Tacos are vegetarian. The King Classic Caesar Salad looks super fresh. The Rags To Riches Apple Pie sounds amazing. Instead of the Millionaire's Bacon, go for the Baby Got Back Ribs: they're served with baked beans and slices of white bread. "Cook that shit slow, yo," Snoop warns.

There are handy tips too, like how to make a double boiler, and how to debone a chicken.
While the recipe pics and self-portraits fade out near the end of the book, some of the best are up front. Here's Snoop opening his pantry for inspection: there are Pop Tarts, but there's also Lemon Pepper seasoning and good quality hot sauce. Here's his fridge: there's Moet on ice, but there are eggs, expensive pickles and several types of mustard.

This isn't, as Snoop declares at the start, "the best cookbook ever made". It's more like a curio that contains some decent recipes, told in the up-front style of those Thug Kitchen collections. If you have a "shawty" in your life who has a Drop It Like It's Hot tea towel framed and hanging in their kitchen, this would make a perfect Christmas gift.

Released in November, you can't help but feel that perhaps that was entirely the point.

This article was originally published at nzherald.co.nz and is republished here with permission