Customised T-shirts are commonplace between lads on stag dos - but this man was given one by his girlfriend to ensure he did not stray during his wild weekend.

Ahead of a friend's pre-nuptial party in Bristol, Akeem Griffiths, 25, found an item that had been hidden inside his suitcase by Laura Smith, making it plainly obvious he was not on the market, the Daily Mail reports. 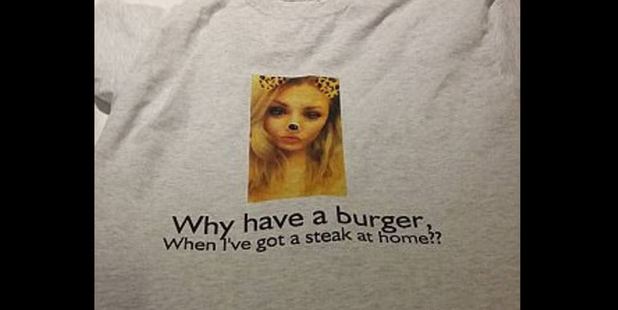 Akeem Griffiths found an item that had been hidden inside his suitcase by Laura. Photo / Facebook

A message on the front of the T-shirt said "Why have a burger, when I've got steak at home??" accompanied with a picture of Miss Smith.

On the back the garment, alongside a picture of the two together there is the message "I love my beautiful girlfriend, Laura Smith!"

Mr Griffiths, from Rhondda, south Wales, saw the funny side and quickly posted on Facebook: "When your going on stag do this weekend and as I'm checking my suitcase I find this. There is absolutely no way I am wearing this."

And the prank went down very well with their friends on the social media site, with many people - mostly female - declaring the idea as ingenious.

Another added: "This is brilliant fair play to the girl amazing I like how she thinks."

A third posted:"Quality mate. Hats off to her." But, the man who was getting married, Gareth Davies, seconded Mr Griffiths' insistence that the t-shirt would be staying in his suitcase.

He said: "IT'S THE STAG SPEAKING.... thats definitely not aloud. But very good effort Laura lol."

This story originally appeared at dailymail.co.uk and has been republished here with permission.