Under-fire All Blacks and Crusaders first-five Richie Mo'unga has taken to social media to offer his side of the story after he was filmed training with teammates near their team base in Christchurch yesterday.

Newshub reported that a witness had spotted the Crusaders players who belonged to separate "bubbles" passing and kicking the ball between them at a park.

The Crusaders confirmed that Mo'unga was one of the players involved and said in a later statement that it was not an organised team training.

The Crusaders players have since been widely criticised, including from NZ Rugby boss Mark Robinson who said the players' actions were "unacceptable".

Speaking on his Instagram account, Mo'unga this morning apologised for not being a role model but insisted that the report didn't tell the whole story.

"As many of you would've seen yesterday, there was footage of me picking up a ball and chucking it back to some of the other lads," he said, speaking directly to the camera in an Instagram story.

"I just want to speak about what happened and clear a few things up. Some things that I think are important to know and also some things that was forgot [sic] to be mentioned on the news last night.

"I want to start off by saying this was not an organised training. There were no communications before hand saying that we should train in this park together. It was by coincidence that I rocked up and they were there training.

"In fact, they were there just finishing up their session. My local park is that local park and our training schedules are the same so we run on the same days. It just so happened to be it was the same time." 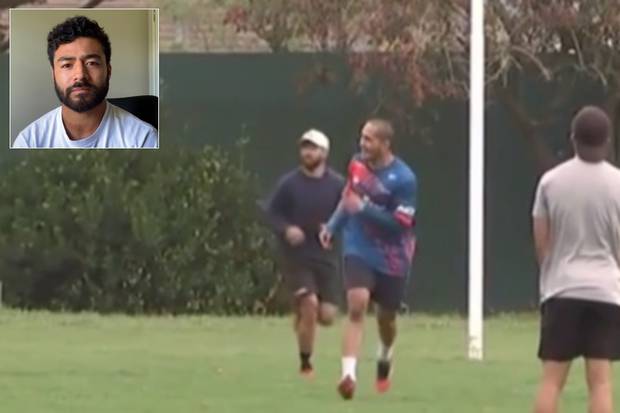 Mo'unga continued to outline what happened, which he says was a coincidental meeting where he eventually broke the bubble on accident.

"As I arrived I [talked] to the boys from afar, asking how they were and got ready for my running session. As I had finished one of my running sessions, the ball had been kicked over and instinctively I went and picked the ball up and threw it back to them.

The 25-year-old then apologised for his actions saying it "doesn't excuse" his behaviour.

"I want to thank all my friends and my supporters and all my family and people that know me well enough to know that I'm not out there on purpose."

Prime Minister Jacinda Ardern urged Kiwis on the weekend to continue to follow the level 4 rules and said those that continued to flout them were "idiots".

Observing the trajectories overseas had helped the Government to decide to "go hard and go early", Ardern said.

"Be proud of your efforts that you have all made. It is making a difference. Now is the time though to remain focused, to not let up.

"It improves our chances of getting out of this alert level."