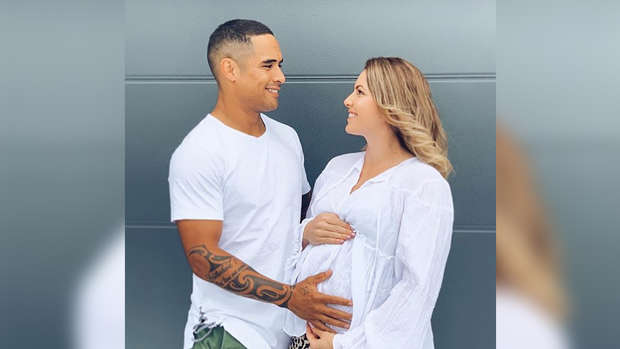 All Black Aaron Smith and his partner Teagan Voykovich have shared a family update as they prepare to welcome their baby into the world.

Teagan posted a photo to her Instagram of the pair, captioning the post: "One of the most magical things in the world. Lucky to be doing this with you". Alongside the caption Teagan also mentions through a hashtag that she is in her third trimester.

The pair have prepared for the new arrival with a completed nursery.

The couple announced that they were expecting a baby in March.

BUMP DATE! 🤰🏽 WOW! we are into the 9th month now & where in the world has time gone 😱 i never thought i’d see the day we’re it would be a battle to roll over in my sleep having to get Aaron to push me over & move my pregnancy pillows into the right places 😅 hasn’t been easy adjusting to the crazy changes in my body but I’m definitely feeling so energised & excited to meet our little human! We can’t wait to see what he looks like! (Who he looks like 👼🏾 👼🏼) will he have Aaron’s nose my lips?! My Hair? Aaron’s eyes?! We are forever debating about it!! So ready when you are little man! 😅😅 #bumpdate #pregnancylife #9monthspregnant #pregnant #babybump

Smith and Voykovich, who live in Dunedin, recently went into business together, opening a gym which focused on what is known as F45 training.

In April, Smith signed a new two-year deal with NZR and his Super Rugby side through to 2021.

Aaron was named in the team to play in the Bledisloe Cup, and is expected to play against the Wallabies in Auckland this weekend.