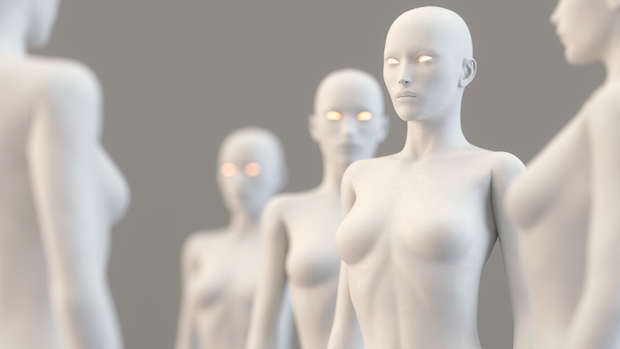 At 6ft tall with a rippling six-pack and brooding dark looks, this droid can also welcome his owner home and discuss their favourite TV show or film, creators say.

He can even woo them with romantic phrases and words to their favourite love poem or song.

Every part of him can be built to order – including the size and shape of his manhood – though the developers have not yet found a way of making that part fully robotic.

In a new video, unveiled by Delaware-based makers Realbotix, Henry jokes; ‘What does a cloud with an itchy rash do? Find the nearest skyscraper.’

At around six stone, Henry’s a bit of a lightweight and is yet to be endowed with robotic movement in his body.

His silicone body is anatomically correct in every way, and is topped by a robotic head that users interact with through an app on their iPad or tablet.

Matt McMullen, a married father-of-five from San Diego, California, and CEO of Henry’s creators Realbotix, unveiled the ‘manbot’ earlier this year saying it would offer ‘companionship’ to lonely women all over the world.

McMullen, 48, explained at the time: ‘Women have the same issues of loneliness as men. People call them sex dolls but mostly it’s about companionship.

'In this world of computers, people are missing out on human interaction.’

Realbotix already produces the controversial ‘Harmony’, a female robot with dozens of interchangeable parts, allowing owners to alter everything from eye colour to hair and even bottom shape.

The market for ‘sexbots’ is currently 95 per cent male-dominated and some have criticised female versions as ‘objectifying’ women.

One manufacturer – shockingly – offers a robot with a ‘Frigid Farrah’ setting which tells users ‘No, No!’ before succumbing to a sexual advance.

She said: ‘What’s not to love about a dashing manbot? It’s possible they will out-perform men in certain areas, not just in the bedroom.

'Perhaps that will encourage men to up their game and find out what women really want. And if they can teach him to give a massage and take out the rubbish, all the better.’