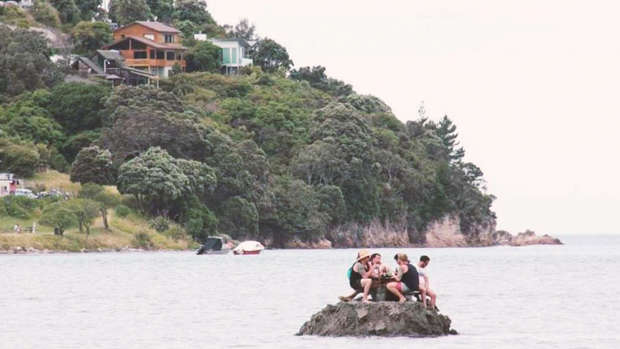 GQ magazine praised the "heroic New Zealanders" who built the giant sand castle off the beach on the Coromandel Peninsula so that they could have a few drinks.

Newsweek cited the island sanctuary in a story noting that liquor bans were enforced at other places where the New Year was celebrated such as New York's Times Square, where 2 million people gathered.

The BBC reported that the sand island was still intact the next morning.

GQ writer Jay Willis said the island builders' explanation that they were not subject to the liquor ban because they were in "international waters" was "a quote that the relevant Nobel committee should engrave on the medal that will presumably be awarded to these amateur engineers".

"Alas, under the 1982 United Nations Convention on the Law of the Sea, 'territorial waters' within 12 nautical miles of the coast remain subject to a state's sovereignty, which means that a temporary manmade sand structure located in the intertidal zone does not come close to falling outside New Zealand's jurisdiction," he wrote.

"Fortunately, the chill-as-hell law enforcement authorities, in this case, do not appear to be overly concerned with delineating the precise legal extent of the high seas.

"'That's creative thinking — if I had known [about it] I probably would have joined them', said local police commander Inspector John Kelly when told about the sand island.

"It is comforting to know that even in these divisive times, appreciating the intricate, absurd lengths to which grown adults will go to enjoy a beer at the beach remains universal."

The story was picked up by United Press International and has appeared on news sites in Australia, Britain, the US, Singapore, India, Sri Lanka, Russia and Malta.