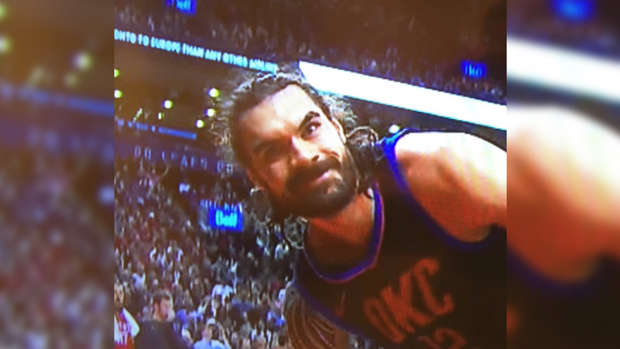 Kiwi centre Steven Adams has taken another knee to the groin in Oklahoma City Thunder's latest win over the Toronto Raptors.

It's not the first time Adams has been struck in the ''family jewels'', most famously from Golden State Warriors' forward Draymond Green two seasons ago.

This time it was former teammate Serge Ibaka as Adams tried to stop a drive to the basket.

Adams recovered after the third quarter incident to shoot 25 points as the Thunder upset the Raptors in Toronto 132-125.

All of his scoring came in the first three quarters before guard Russell Westbook took over during the closing stages to finish with a triple-double, including 37 points.

Steven Adams has taken a Draymond right to the Kiwis from Serge Ibaka.

This smile Steven Adams gave the camera after he drew a foul on Ibaka is everything. pic.twitter.com/O6vuDmmHIe

Haven’t had a Steven Adams groin shot in a while. Adams to the locker room after the contact from Serge. Was joking with Ibaka after the hit: pic.twitter.com/Q8LXSysrD8

Steven Adams on his former teammate, Serge Ibaka, accidentally kneeing him in the groin: “Unfortunately, Serge is not the most coordinated guy. So he ended up, yeah, old mate. What a d***” pic.twitter.com/oS5DIF2XZj

A vastly improved offensive threat this season, Adams went close to surpassing his best game score in the NBA of 27.

He was slightly down on his average with eight rebounds but matched his NBA best with four assists as a Toronto team with the league's third-best record (52-18) were toppled by the Thunder (sixth best at 43-29).

Adams had only recently returned from missing two games with a hip injury.