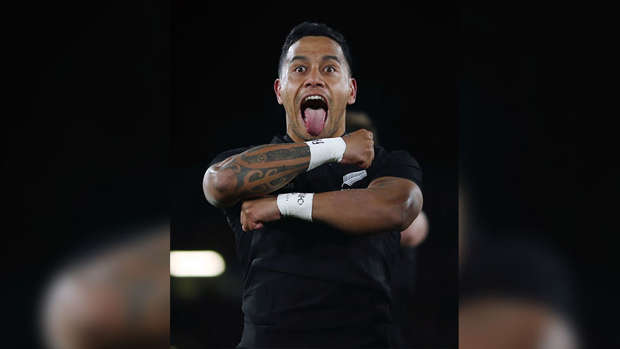 New All Black Te Toiroa Tahuriorangi had an emotional haka performed for him by his family after he made his debut for the All Blacks.

Tahuriorangi came off the bench to make his Test debut in the 46-24 win over Argentina on Saturday.

the 23-year-old replaced TJ Perenara with 10 minutes remaining in the match to the delight of his family, who were watching at Trafalgar Park in Nelson.

The haka was broadcast on television following the game and showed three family members showing a huge amount of respect for Tahurirorangi.

"This haka will mean a lot to him and you could see how much it meant in the pre-match haka," said Sky commentator Justin Marshall.

"He was well and truly emotional and I think that emotion was shown post-game and pre-game but when he (Tahuriorangi) came on, he was composed and played well."

"He'll be loving the family haka because he came on and made a difference, and that's what Steve Hansen would have asked for."

The All Black was named in the NZ squad for the series against France in June, but never played an actual game as names like Aaron Smith and TJ Perenara were chosen over him.

Tahuriorangi's dad Pae Tahuriorangi said pre-match he was proud of all his son had achieved,

"He's definitely worked hard and it comes with sacrifices, like many sportspeople, whether it's just for your local club or at a higher level."

Tahurirorangi's father and his immediate family traveled to Nelson from the North Island to watch the game.

"We'll enjoy the moment with him. I'd be lying if I said it won't be emotional. My phone's been going crazy with messages and calls from family and friends in Australia, England, the United States, and these people are crying.

"But like usual, when he runs on the field, he picks up a piece of grass and understands why he's there. It's 'enjoy the moment but remember that back in the day people fought for the land,' he's just fighting in a different manner, on the rugby field."