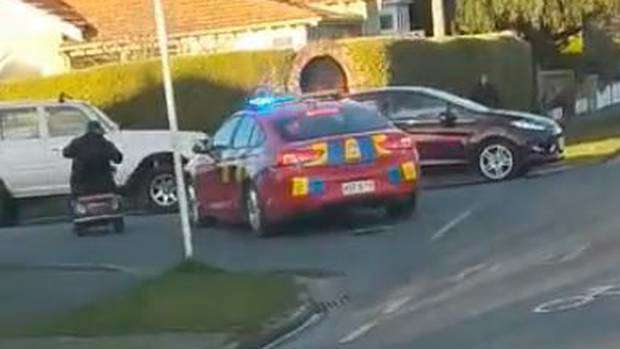 A bizarre police pursuit of a man riding a mobility scooter has been captured on video and has gone viral online.

The scooter was filmed weaving in and out of traffic in Timaru in a very low-speed chase by a police car with flashing lights.

The video shows the man 's determined escape bid during the video.

"He's going for it!", says the woman who filmed the pursuit from her car and provides a compelling commentary along with a child in the vehicle.

"What is the old man up to?" she says, laughing in the background.

The video ends with the chasing police forcing the scooter driver down a driveway. A police officer can be seen leaving his car to continue the pursuit on foot.

People commenting on the post were quick to see the funny side of the chase, with one man writing on Facebook: "Bet he gave the coppa's an ear full when they caught up with him . Send It Grandad"

"He's going to get in so much trouble" says the woman filming.

Police have been contacted for comment by the New Zealand Herald.