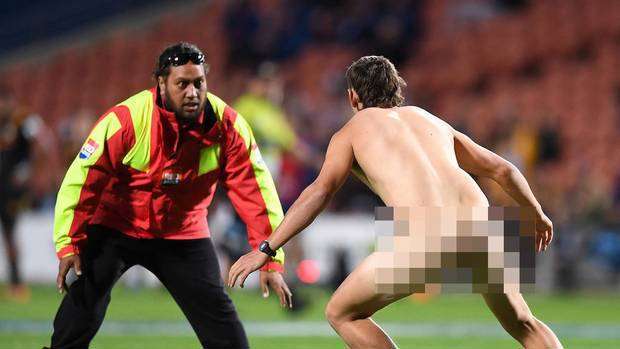 If you're going to streak at a rugby match. At least put on a great performance...

Last night during the Chiefs & Blues Super Rugby match in Hamilton a streaker showed everything including a great step.

One of the better streaker efforts you’ll see this year! #CHIvBLU pic.twitter.com/eJoGMXPs8l

Man that streaker could be going for a Super Rugby contract with those steps! Had the guards bamboozled!... should have picked a warmer night though 😂 #CHIvBLU

A fan watching the game on the recorded footage suggested: "This is the best streak I've ever seen." The pitch invader is likely to face a fine for his disruption. A 19-year-old streaker who disrupted the Crusaders semi-final match last year was fined $300 in the Christchurch District Court by Judge David Ruth after admitting a charge of intentionally and obscenely exposing his genitals at AMI Stadium.

Give that man a jersey!