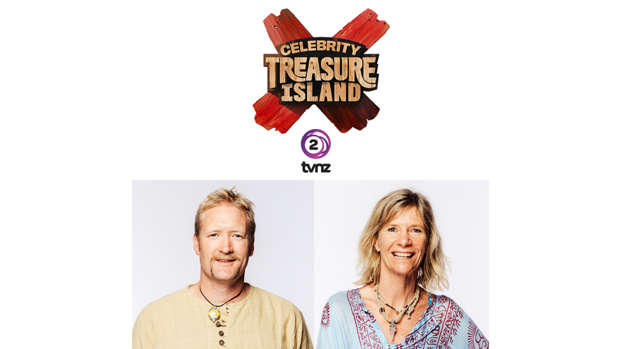 And you thought we were done! Olympic champions Barbara Kendall and Eric Murray have been announced as the final celebrities to join TVNZ 2’s rebooted Celebrity Treasure Island.

The sporting legends will leave their gold medals at home as they search for buried treasure in beautiful Fiji when the iconic series premieres on Sunday 18 August.

Widely-regarded as one of New Zealand’s most successful and enduring sportspeople, Barbara truly is an Olympic legend. The illustrious boardsailor has won gold, silver and bronze medals – she was the first Kiwi woman to compete at five Olympics Games –and in 2019, was made a Companion of the New Zealand Order of Merit.

Most at home on the water, the charity Barbara is competing for is Surf Life Saving NZ.
Champion rower Eric Murray is used to coming out on top. The Olympic hero won gold at the London 2012 and 2016 Rio de Janeiro Olympic Games and four consecutive World Rowing Champs gold medals.

When Eric retired from rowing in 2017 he turned his focus to family life and he is now the primary carer of his autistic son, Zac. The charity Eric is competing for is Autism New Zealand.

Celebrity Treasure Island will be hosted by Matt Chisholm and Bree Tomasel and will premiere on Sunday 18 August, 7pm on TVNZ 2.