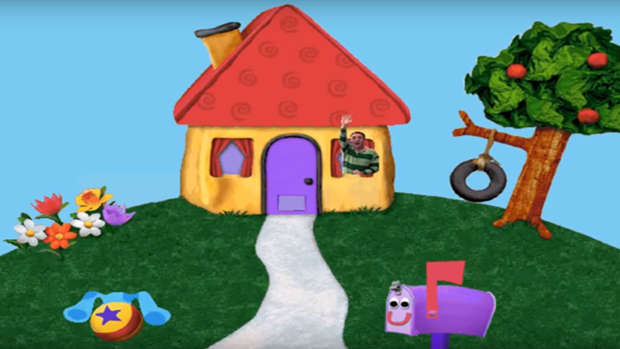 Well, Nickelodeon has rebooted the series – which first aired in 1996 and ended in 2006 – with a whole new host, Filipino-American Broadway star, Josh Dela Cruz.

But that doesn't mean the original star of the show has been forgotten!

That's right, Steve Burns is back just in time for the premiere of the new kids show, which is titled, Blues Clues and You!.

He will also be joined by Donovan Patton - who replaced Steve and starred as Joe.

In a newly released preview, the Blue's Clues alumni make a sweet cameo as Josh's cousins and offer sage advice to help him solve one of his first mysteries.

You're going to need to sit in your Thinking Chair for this news: Steve and Joe will be in the first episode of Blue's Clues & You! Check out this clip as they return to help Josh play his very first Blue's Clues 🐶💙🖍️ pic.twitter.com/qcGgDDv9c0

When the news of a new version of Blue's Clues was announced earlier this year, the original Steve, Steve Burns, has even given Josh his seal of approval.

"I had the great honour of being a part of the search for the new host, and I give Josh two thumbs up! He can definitely fill my shoes, and the rugby shirt," he said in a press release. Blue’s Clues and You - which is set to be released in November this year - will see the return some of the show’s original characters including, Magenta and the Felt Friends.

Fans of the show took to social media to share their delight at the remake after the first teaser for the show was unveiled.

"I'm crying tears of joy, this is so cute!" one person wrote. "I cannot wait for the show to air, because the original show was my childhood! Ah feels!"

"This looks absolutely perfect," another added.

Blue's Clues is coming back, this is the happiest I've been in four and half centuries 💚💙 pic.twitter.com/yErjWALMcq