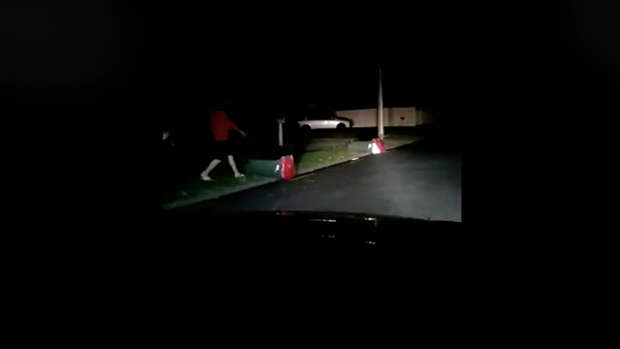 A couple who spotted a drunk man kicking rubbish bins in their neighbourhood followed him around and made him pick the bins back up and apologise.

Footage shows the drunk man stumbling along the street and picking up the bins as the couple, who filmed the video, tells him to do so.

The incident reportedly happened in Papatoetoe, Auckland, on May 13.

"It was around 11:20pm. We'd just come back from shopping and saw these two drunk boys on the street. The other one is all good but this one was wasted as and he's the one who makes the mess," Saia Frank Sola told the Herald.

The video was shared to Facebook where it has had more than 35,000 views.

"Pick that up! All of it," they keep telling the man as they follow him along the street.

"When you're drinking again, make sure you know how to control yourself," they tell the man as he picks up the bags.

Facebook users have been praising the couple for teaching the man some manners.

"Yup, you make the mess, you clean it up, well done looking after the neighbourhood," someone said.

"Good on you for telling him to clean it up," someone else said.