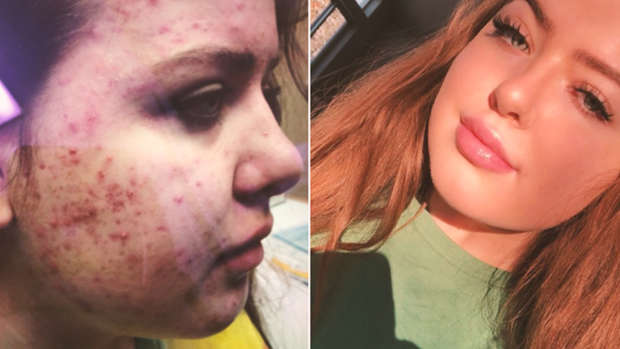 A high school student from Anchorage, Alaska has been suffering from horrible acne since she was only in sixth grade and managed to completely rid her skin of blemishes by creating her own skincare routine.

The teenager, known only as Kaarle, has been battling acne from middle school up until her freshman year at South Anchorage High School and it took her two years to finally clear her skin of pimples after trying tons of different products.

After trying many pills and topical treatments that never worked for her, Kaarle took matters into her own hands and came up with her own regimen involving six products and just five steps which led her to start seeing noticeable results in just one week, reports Daily Mail.

She shared her transformation photos on Twitter just yesterday with the caption, "New skin who dis" and the results were so impressive it received over 5,000 retweets and a whopping 30,000 likes and counting.

Before listing the exact steps of her routine, Kaarle gave a little background behind her long struggle with acne.

After admitting she tried tons of different medications and treatments that never worked she said, "My mom decided to take me to the dermatologist and they prescribed me Accutane so that played a huge part.

"If you're struggling and nothing seems to work. Go to the dermatologist. Trust me they knew what I needed on my first visit." When it comes to her skincare routine it is very basic but does the intended job which is all that matters.

She starts with face wash and uses Murad Clarifying Cleanser ($30) but says she wouldn't recommend it unless you have oily skin.

Kaarle has naturally oily skin but her medication makes her skin super dry so she washes her face with a Clarisonic ($169) which she says she absolutely loves.

To help get rid of her acne scars, Kaarle admitted she has tried and tested many different brightening lotions and masks but only two products worked. She washes her face using a Clarisonic Brush ($169). Photo/Supplied

She said she uses the mask three times a week and applies the moisturizer every morning and evening as usual.

When it comes to sudden breakouts , Kaarle uses the cult favorite Mario Badescu Drying Lotion for $17 which many people who suffer from acne or blemishes rave about.

She applies the drying lotion to the pimple or problem area at night and said that the pimple is usually gone by the next morning. She did add that if she has to remove her makeup, she uses the Neutrogena Makeup Remover Cleansing Towelettes which are only $6 and found at most drug stores or pharmacies.

Kaarle's results are so impressive, you would think she has an intricate routine but she only uses six products in total and it's just a face wash, an electric washing brush, moisturizer, face mask, spot treatment and a hydrating face mist.

She also shared with her followers that she's clearly not an expert and her routine won't work for everyone which is why she recommends going to a dermatologist if nothing seems to be working.

- This article was first published on dailymail.co.uk and is republished here with permission.