Celebrity Treasure Island kicked off on Sunday night and after just one episode it's already polarised fans after a massive mistake that left one of New Zealand's sweethearts in the lurch.

The episode started with Kiwi Olympians Eric Murray and Barbara Kendall having to run around the island and free their teammates from various binds - think an enclosed coffin or a bamboo cage.

It was all going well until they got to Karl Burnett, affectionately known by most of the nation as Nick from Shortland Street. His team  - Team Kahu / yellow - took their next clue and ran off, leaving their teammate tied to a pole. 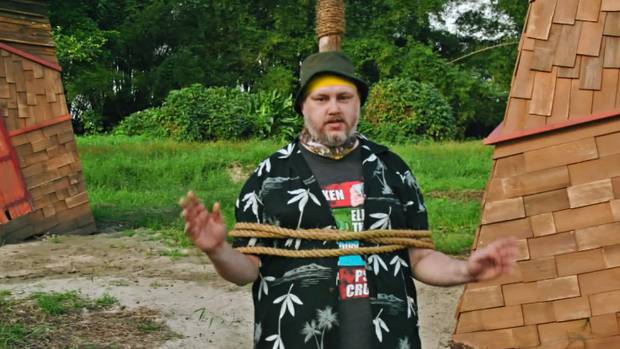 It was an incredibly awkward moment which Karl managed to make a good amount of jokes out of, but there was no hiding his hurt and there was certainly no hiding the awkwardness once he finally rejoined his team.

"How did you forget?" he said when he was finally freed.

Later when the teams reunited on the beach, host Matt Chisholm asked him how he felt and he said: "I'm used to it", prompting this reaction from the blue team (Team Mako): He covered the awkward moment with humour saying, "I'm joking, I'm not used to being tied up to a pole. It's usually a bed".

But the damage was done and Twitter was flooded with support for the Shorty star.

Havent had a good laugh in a while 😄 #NickWheresWaverlyawhenYouNeedHer #CelebrityTreasureIsland

They seriously just played Nick like that? Ouch man 😂😂😂 #CelebrityTreasureIsland

That raid was tragic, thankfully Karl has his acting ability to fall back on though #CelebrityTreasureIsland

There was also a good amount of judgement heaped upon team yellow for the gaffe with one saying there was "so much taukumekume (conflict)" in the team.

Another quoted Shannon Ryan who said in the episode: "That was the worst way to lose, we lost because we lost sight of our team", and added: "Tautoko Shannon, the idea that leaving a team member behind isn't a big deal shows me that your team isn't much of one at all."

Surprised by how bad of a teammate some of these yellow guys are. Especially leader Eric. Wasn’t he in a team his whole life??? #CelebrityTreasureIsland

Celebrity Treasure Island continues on Monday and Tuesday nights at 7.30pm on TVNZ 2.

Both teams have one win each under their belts and tonight marks the first elimination of the season.

This article was originally published at nzherald.co.nz and this is reproduced here with permission