She had almost done the right thing! She started off taking heat and had people on her side, but she gon' dun' messed that up!

You know, it's funny how ONE Instagram comment can seriously take you on a trip to s***sville, a comment that has the following combination of words "Māori are not indigenous". Yup, the Playboy model, Jaylene Cook, who was criticised by Maori academics for her nude stunt, has become a candidate for Facepalm of the year moment.

WE DID IT!! This was BY FAR the hardest thing I have ever done! Both mentally and physically. 2 minutes out of the car park I was already hurting, sweating and ready to turn back 😂 But it's amazing what you can accomplish with the encouragement and support of your partner! I could not have done this without you babe @thejoshshaw! • 🏔 Mount Taranaki Summit 🔭 9000ft ❄️ -11'C/35km winds 🏃🏻‍♀️ 12.6km (1.6km elevation) ⏰ 2am - 6.30pm (12hr hike time) 💪🏼 20kg pack (Josh had 40kg 😱) • This climb has forever changed me. I proved just how far I could push myself and I am truely proud of my accomplishment. This mountain was steep, rugged, ever changing and just pure brutal! Safe to say, I will never do it again 😅

Instagram user @maorimermaid took offence to Cook's naked photo, writing: "Hey Jaylene, would you do a nude photo shoot at a church or a war memorial, or do you only like to disrespect indigenous sacred sites? Hope your five mins of fame was worth the curses that will haunt you for life."

Cook then made a baffling claim, telling @maorimermaid: "Lol. Get a clue before you jump on the bandwagon. Maori are NOT indigenous you ignorant twat." 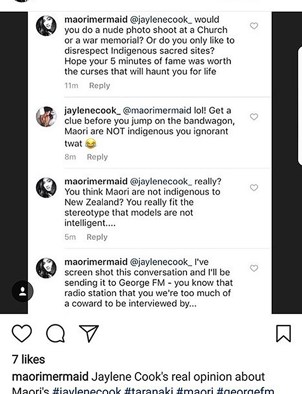 You dun' messed up Jaylene! It was only a week ago Cook defended her decision to go nude saying her and her partner did their research on the history and cultural beliefs around Mt Taranaki before hiking to the summit. Awkward, probably should have done a tad more research bub.