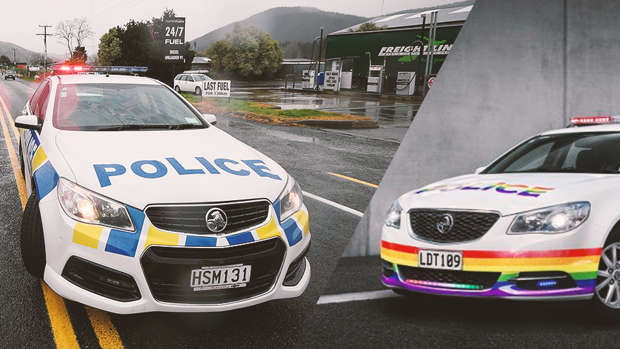 Pride Festival is in full swing in New Zealand and the NZ police have come to play! This is amaaaaaaaaaazing!

A police car will stand out more than ever as a one-of-a-kind rainbow-coloured patrol car makes its debut for the Auckland Pride Festival.

The rainbow car was created to celebrate the police force's commitment to diversity and to acknowledge the important relationship between the police and the country's Lesbian, Gay, Bisexual, Transsexual, Intersex and Queer (LGBTIQ+) communities.

The vibrant car will be on show at the Pride Parade and at associated Pride festival events. Inspector Phillips said the spark of inspiration for the car's new look came from the warm welcome given to the police's Te Reo Pirihimana car which was designed to support Maori Language Week.

She put in one call and the rest is pride history.

In a first for the NZ police, the colourful car will be cruising in the Pride Parade and driven by the Police Commissioner.

Police Commissioner Mike Bush said the rainbow car was a visible representation of the police value of diversity.

"As an organisation, we look to encourage staff to 'use who they are' not 'lose who you are' when becoming a police officer," he said.

"Therefore it's important to encourage staff to show pride in the communities they represent. Uniformed Police staff will march alongside the rainbow car at the Pride Parade on February 17.

The Rainbow car has been created to mark NZ Police’s commitment to diversity and to acknowledge the important relationship between Police and New Zealand’s Rainbow community.

Police Commissioner Mike Bush says the Rainbow car is a visible representation of the Police value of diversity.

“Therefore it’s important to encourage staff to show pride in the communities they represent,” he says.

“We are a diverse organisation and I am proud of the work we’ve done over recent years to build relationships with the LGBTIQ+ community.

“I also encourage members of the LGBTIQ+ community to join us as future Police recruits as part of our current recruitment drive,” says Mr Bush.

Uniformed Police staff will accompany the Rainbow car at the Pride Parade on 17th February 2018.

The Rainbow car isn’t a permanent addition to the Police fleet, as the livery is removable. The car will be returned to circulation with standard Police livery after the Auckland and Wellington Pride Parades.