Emotional displays are nothing new at Massey University's celebration to honour graduates in its Maori studies courses but no one was expecting a student to seize the opportunity to make a grand romantic gesture at last Thursday's ceremony in Palmerston North.

To the delight of the large crowd in the Regent Theatre, Kira gave him the response he was after. The Havelock North couple were among 15 students being honoured at the ceremony.

The couple have known each other about 8 years, but it was only about three years ago that they got together, when studying together at Te Wānanga o Raukawa.

On Thursday they were on stage together, hand-in-hand with near 1-year-old baby in arms and the whānau supporting haka Tika Tonu around them in what was already a unique-enough moment without the opportunism that followed.

"Honestly, it wasn't planned at all," he said. "For some reason it was in that time and space that it was right for me." 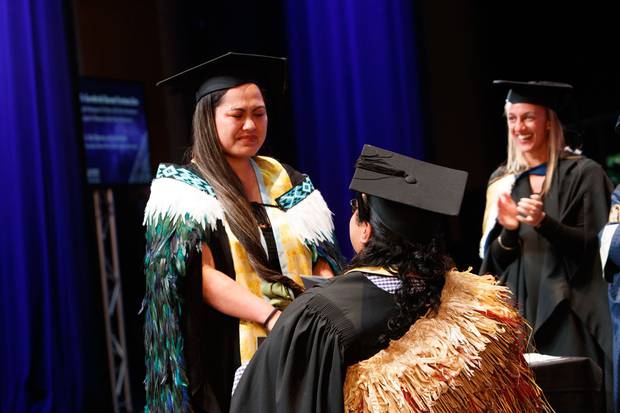 "The whānau were doing the haka, but for me in that moment the whole space went quiet," he said.

Māori Graduates provides students with an opportunity to celebrate their academic success with whānau and friends and is renowned for its stirring haka and waiata tautoko. But this is the first time the audience has been brought to tears by a marriage proposal.