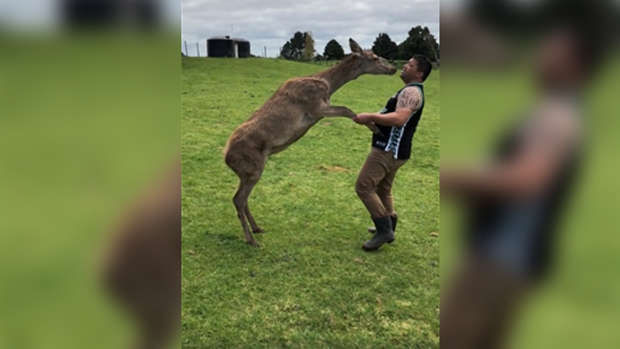 A Tauranga man has warmed the hearts of Kiwis after posting a video of himself serenading and dancing with a pet deer, which has since gone viral on social media.

In an exclusive interview with the Herald, Quentin Brears said Judo the Deer became his friend's pet after her mother was found shot in the wild by hunters two years ago.

"Judo the Deer was rescued. A mate was out and we found her in the bush after her mother had been shot. So they took her home and she's been there ever since.

"She soon became their friendly pet deer and the rest is history."

The deer grew to love her new family and became so comfortable living among people she has learnt to dance and perform tricks.

"She basically started walking herself. When you back up and hunch down she automatically jumps on like she would another deer. So when I start slowly walking away she follows on two legs!

After filming the deer walking on two legs, he decided to serenade her with an Ed Sheeran classic in the hope she'd join him for a dance as well.

"Once I did the walking one I thought, (I) wonder if she'll dance ... thought I'd give it a go, and I just picked her up and we had a nice old dance. She didn't seem to mind."

In the video Brears belts out Thinking Out Loud by Ed Sheeran and during the dance Judo reaches in to give him a kiss of appreciation.

"I tried to think of a dancing song and all I could think of was Ed Sheeran. Now I'm thinking of taking this act on the road," he joked.

While Brears jokes that he's set to take Judo on a tour around the country, he says she's been a loving pet for his friend's family.

"She's such a friendly pet. She's really safe around the kids. The kids will play with her and she interacts really well and is quite gentle."