An Irish rugby writer has called for a stop to the All Blacks haka, saying it "gives New Zealand an unfair advantage".

In a column titled 'Haka gives New Zealand an unfair advantage and needs to stop' on sports website Pundit Arena, Ewan MacKenna asks why the World Cup is still "pandering to the dance".

"That's unfortunate as New Zealand are justifiably big-headed enough without a massaging of their already massive egos," MacKenna wrote.

"Yet even World Rugby have it in their rules that to not stand on your own 10-metre line and watch a bunch stick out their tongues and slap their thighs is worthy of a fine and a telling off.

"Indeed if we are to engage in these cultural activities in rugby, perhaps Ireland's opponents should have to spend a few minutes watching our players sitting around a table in midfield, sipping cups of tea and bemoaning everything from economic migrants to the latest bin charges."

MacKenna said the haka had "been ruthlessly exploited and commercialised and ultimately cheapened".

"That's not to say it doesn't have beauty and meaning to Māoris [sic], but Irish dancing can having meaning to us and that doesn't change the fact that it was monetised by Michael Flatley turning to liquid plastic on stage."

After taking shots at the haka, MacKenna went on to attempt to describe the practical reasons why the traditional challenge gives New Zealand an advantage.

"There's a practical reason why the Haka shouldn't happen as, while it provides a psychological edge through self-inspiration and via an attempt at opponent intimidation, it also provides a small physical edge as others are forced to stand still and go briefly cold.

"There's another reason too though as there is a huge lack of self-awareness about this. Again there are those who'll say it's native and it is to some, but the majority of New Zealand players haven't been Māori. Instead, they descend from forefathers who were actually ruthless oppressors of natives.

"Anyway, it's completely overdone. In rugby, and in life. A New Zealand graduation or homecoming, a wedding afters or merely a boozed-up night out, it seems, can barely pass by without a YouTube video emerging of a man leaping about with all the authenticity of a Blackrock College conversation detailing both tillage methodology and livestock vaccination." 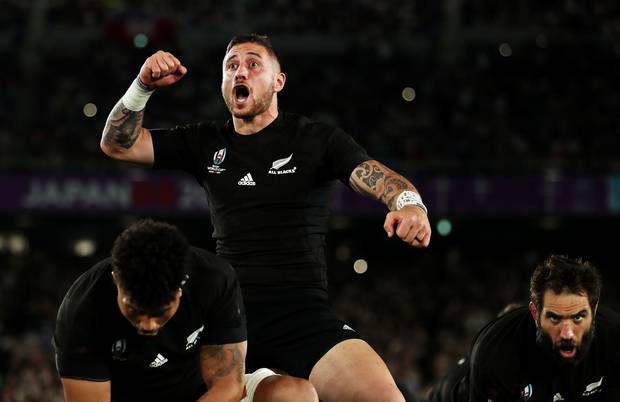 This isn't the first time the haka has come under the microscope in world rugby, with similar questions being posed throughout All Black history.

Legendary Wallabies captain John Eales, who instructed his team to turn their backs to the haka in 1996, has said that he regrets his decision and now understands why the haka holds such a sacred place in Kiwi sporting lore.

"People often ask me about the haka and I do regret not facing the haka at this time," Eales said in 2014.

"I never felt it gave [the All Blacks] an unfair advantage, but it did let them own those moments before kickoff and we were basically just passively taking it.

"The true value of the haka is in connection, and as the opposition, you need to decide how you are going to connect and not dissipate as a team in that moment."

The Irish writer's column comes after some fans sung during the haka before the All Blacks' 23-13 victory over South Africa in their World Cup opener, which was criticised as "disrespectful" by many others.

The reaction to the kapa o pango at International Stadium Yokohama was met with a strong reaction on social media, with many criticising the behaviour of the fans at the stadium.

"The f****** disrespect," said one fan on Twitter. "When south Pacific teams haka before the game it's the equivalent of a national anthem … to sing ole ole over that would be like singing fly eagles fly during the Star spangled banner."

While many others added similar sentiments, some also argued that it was a fair way to respond to the All Blacks' challenge.

Love your rugby? Subscribe now to NZ Herald Premium for unlimited access to premium content, including exclusive, first-class rugby coverage. This article was originally published at nzherald.co.nz and is reproduced here with permission.