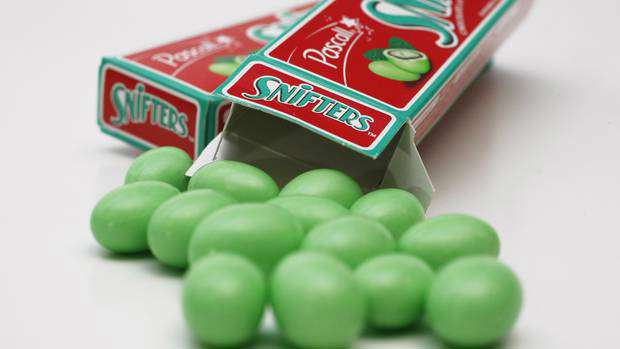 Do you miss going to the movies and opening up a bag of snifters?

Now your favourite childhood treat is making a comeback - kind of - thanks to Pascall releasing its brand new limited-edition Snifters Lumps.

Snifters Lumps are a combination of the old Kiwi classic as well as the ever-present Pineapple Lump minus the pineapple.

The Kiwi delicacy combines the minted flavour of Snifters lollies with the chewy, chocolate-coated goodness of the Pineapple Lump.

Mondelez New Zealand head of marketing Will Papesch says they wanted to continue to bring back Kiwi classics in a new "exciting" way.

"We've seen a lot of excitement with recent collaborations, such as Perky Nana Lumps, which combined Perky Nana with the iconic Pineapple Lumps.

"Knowing this has been such a winning combination, we've been looking at additional ways in which we can continue to surprise and delight our Kiwi fans. Bringing Snifters together with Pineapple Lumps is one of the exciting ways in which we are doing this." The treat has not been produced since 2009 due to a lack of consumer demand.

The good news is the recommended retail price is $2.79, making it a cheap return back to your childhood.

Kiwis couldn't get enough of the news, with many going wild over the news.

"Snifters!!!!! Like seriously, why on earth did you ever stop making them.. and tangy fruits for that matter," one said. Another wrote: "Snifters are coming back I'm literally gonna cry."