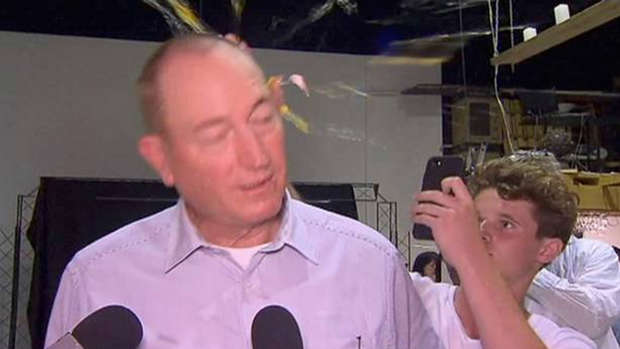 The 17-year-old – real name Will Connolly – shot to fame over the weekend after cracking an egg on the head of the right-wing politician.

The incident was caught on camera, as was Anning's response when he slapped Connolly twice.

"Our client has no intention of making a complaint or taking any action against senator Anning," Connolly's lawyer Peter Gordon told reporters in Melbourne on Tuesday.

Connolly has been unofficially appointed the next Australian of the Year after his stunt and for his generosity in giving the money donated to him to the victims of the mosque massacre.

The egging came after Anning made victim-blaming comments in the wake of Christchurch mosque shootings.

god just might be a teenage white boy with an egg pic.twitter.com/CIUKDT5vHE

After the incident, where some men held him in a chokehold, Connolly was arrested.

Connolly was then released without being charged and he spoke out on Twitter.

"Don't egg politicians. You get tackled by 30 bogans at the same time," he said in a video. "I learnt the hard way."

He also revealed on Twitter that: "This was the moment I felt so proud to exists as a human being. Let me inform all you guys, Muslims are not terrorists and terrorism has no religion. All those who consider Muslims a terrorist community have empty heads like Anning."

Asked by a journalist what she thought of Anning's comments, she replied simply: "They're a disgrace."

Qantas is reportedly considering stripping Anning of his exclusive membership over his controversial comments but believe it or not, he still has friends in politics.

Close to 1.3 million people have condemned Anning in an online petition and a swathe of Australian politicians have criticised his comments and called for his official censure.