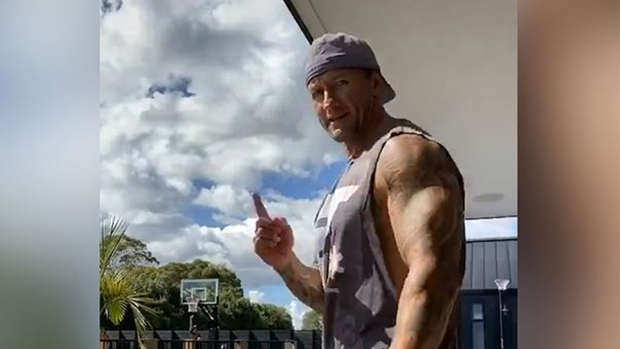 Spare a thought for Payton Spencer, son of Carlos, who just got shown up when his father made a guest appearance on his TikTok channel.

The younger Spencer has been sharing videos showing how their family is surviving lockdown and trying to nail difficult trick shots for his followers.

One shot involved firing a rugby ball backwards long-distance, over a fence and into a basketball hoop.

Payton had problems perfecting his aim.

Then King Carlos stepped up.

In case anyone thinks it all happened first time, a earlier video shows Carlos needed practice. But not much.

The following day, Carlos was at it again, nailing a long-range kick into the hoop with enviable ease. His son wrote: "Can't believe the old man got it 2nd shot".

It's not the first time Carlos Spencer has made an appearance on his son's growing TikTok channel, popping up in the past to shimmy shirtless to Nesian Mystik's hit Sun Goes Down.

Carlos Spencer is one of many well-known New Zealanders to make an appearance on social media recently, detailing how they are coping with lockdown and sending messages of support to fellow Kiwis.

In a Government-funded ad, Kiwi icons such as Taika Waititi and Willie Apiata joined forces to tell Kiwis to encourage New Zealanders to work together to halt the spread of coronavirus.

They urged Kiwis to stay calm, be kind and take the pandemic seriously, using the hashtag #uniteagainstcovid19.