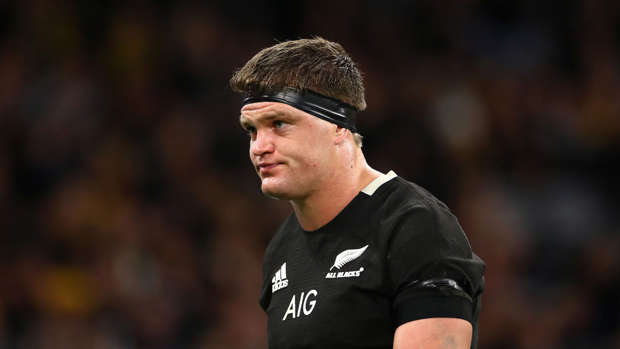 All Blacks lock Scott Barrett has been hit with a three-week ban following his red card against the Wallabies on Saturday.

Barrett, who pleaded guilty, trained with the squad this morning, with no additional locking cover brought into the All Blacks squad.

The 25-year-old will miss this weekend's test against Australia with the ban lasting until Sunday September 1. He will be free to play in the All Blacks' final warm-up test against Tonga on September 7 and for the start of the Rugby World Cup.

French referee Jerome Garces, who also sent off Sonny Bill Williams in 2017, gave Barrett a red card after a no arm tackle on Wallabies skipper Michael Hooper in final minute of the first half in Perth. Barrett's elbow connected the back of Hooper's head. Cyril Brownlie, Colin Meads and Williams are the only previous All Blacks to be sent off in a test.

Williams was slapped with a four-week ban for his no arm tackle on Anthony Watson of the Lions in 2017.

"For me I have a clear picture on the field," Garces told the television match official following the Barrett incident on Hooper.

"He never uses his arm. He just puts his shoulder and elbow on the neck and head so it's clearly dangerous. It's direct with force so I have no option but to be a red card against four," he added.

"Having conducted a detailed review of all the available evidence, including all camera angles and additional evidence, including submissions from his legal representative, Stephen Cottrell, the Foul Play Review Committee upheld the Red Card under Law 9.16."

"With respect to sanction the Foul Play Review Committee deemed the act of foul play merited a mid-range entry point of 6 weeks due to World Rugby instructions that dictate any incident of foul play which results in contact with the head and/or neck must start at a mid-range level. However, taking into account mitigating factors including the Player's exemplary judicial record, his expressed remorse and the fact the Player has pleaded guilty at the first available opportunity, the Foul Play Review Committee reduced the suspension to 3 weeks."

"The player is therefore suspended for 3 weeks, up to and including Sunday 1 September 2019."