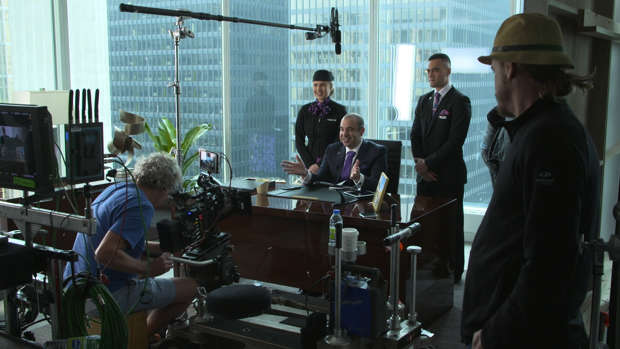 Air New Zealand has announced that it is set to drop it's latest safety video on August 1.

The video will feature a star-studded Kiwi cast which features several All Blacks including Head Coach Steve Hansen and Captain Kieran Read, actor Cliff Curtis, Former Black Ferns Captain Fiao’o Fa’amausili and members of the renowned 1987 All Blacks squad, along with former Wallabies Captain George Gregan. Alongside the famous Kiwi cast, US Suits actor Rick Hoffman, who stars as lawyer Louis Litt will feature as a lawyer in a rugby themed video.

The Suits actor first visited New Zealand in 2017 and took to Twitter praising the airline as being "by far the most accommodating" airline in the world, and “insisting” on being Air New Zealand’s next spokesperson.

Air New Zealand General Manager Global Brand & Content Marketing Jodi Williams says when Hoffman insisted on becoming the airline’s spokesperson it became clear he was going to be a fantastic ambassador for the next safety video.

"Rick’s on and offscreen personality is infectious and goes hand in hand with the character of our tongue-in-cheek safety videos. He was fantastic to have on set and we had so much fun teaching him the ‘Kiwi’ way of doing things."

The video comes ahead of the Rugby World Cup which kicks off on September 20.