Up and down the country, New Zealanders are coping with lockdown in their own particular ways.

For some, that means doing more baking than they've ever done in their entire life. For Corrie Walker, the lockdown has involved an impromptu haircut - with a kitchen knife.

In an eight-minute video posted on social media, Walker documents her transformation as she hacks her long hair off with a knife, before completing the new style with a shaver, leaving a mullet. 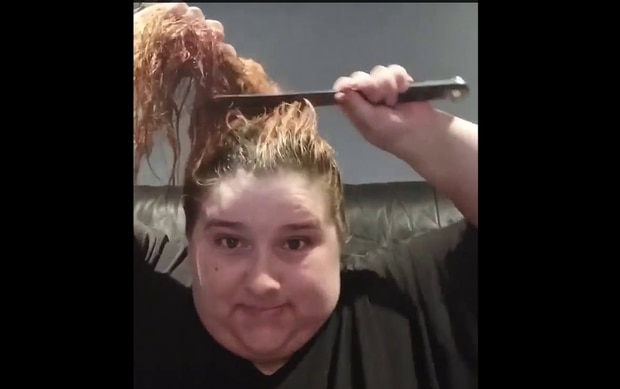 "I literally haven't brushed it in two weeks, so I am going to cut it off."

"If you're wondering, no, I'm not having a mental breakdown. I just don't have any scissors," she clarifies.

Walker tries to cut her hair off with a bread knife but, not making much progress, gets a meat knife.

The second knife manages to cut off her hair in chunks as Walker holds it terrifyingly close to her own scalp.

"That feels so good," she says after the big chop. "I understand it looks like trash at the moment because I literally just sawed my hair off with a knife but I am kinda digging it."

With an electric shaver, she manages to tidy up her new hair do, and halfway though decides to leave a mullet.

She then walks into her bedroom to surprise her wife with her new look.

The video has been viewed more than 340,000 times with people on Facebook applauding Walker's bravery and thanking her for some much-needed comic relief.

"I was living for every minute. Thank you for bringing much needed laughter," one person commented.

"You've got giant lady b**ls !!! I love it LOL. I AM a hairstylist and the knives freaked me out but the end result it not so bad ! You go girl," another commenter said.

In her post, Walker explained she was meant to have her hair cut prior to the lockdown but the appointment got cancelled.

"Not that I feel I need to explain myself, but I was supposed to get my hair cut prior to going into lockdown and got so down about it that I just threw it up in a bun everyday as I wasn't going anywhere and really just gave up on it because I wanted it gone," she wrote.

"I messaged 3 people to see if I should just cut it off and they said yes and to video it and send to them. Which I did, they thought it was hilarious and told me to put on FB because they wanted to share with friends.

"I spent 20-30 minutes looking for scissors and gave up and decided to use a knife. I then called my mum to see where her clippers were to do the rest. It wasn't until I posted the video did she tell me the scissors are in the garage lmao."

She admits the mullet was a "complete spur of the moment" decision but she actually likes it.

"My hair will grow back, I am going to be in lockdown for the next 3 weeks minimum and until NZ is back down to level 1, I will not be leaving the house due to respiratory illness so only my poor wife has to deal with this look," she added.

"Thanks for everyone who enjoyed the video. I appreciate your comments. And to everyone who has an issue. Grow up, its just hair lmao."