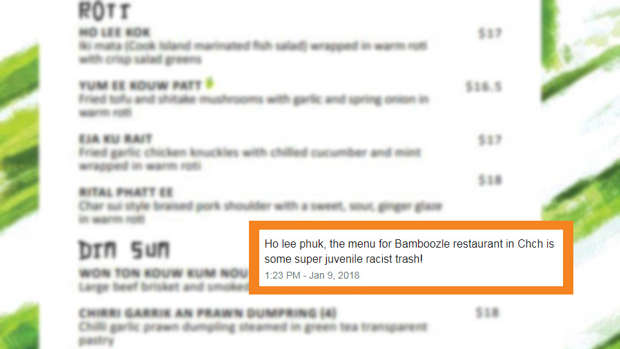 A Christchurch restaurant has been called out by customers and Twitter who are all pissed off by it's racist AF menu.

The menu from the restaurant Bamboozle, owned by restaurateur Phillip Krall, was posted to Twitter with people calling it "racist trash".

The menu, which features items such as "chirri garrick prawn dumprings" and "Eja ku rait" was labelled "disgraceful" and "gross" with one Twitter user questioning the legality of the wording.

That's disgraceful!
How can people even eat there?

yo pākehā wanna make this one of your cute ally moments? share your disgust with them where they'll see it - FB page is bamboozle chch. https://t.co/snX2PRgJaO

Alice Galletly also claimed users are unable to post concerns to the Bamboozle Facebook page without admins clearing them first.

When the Herald asked Kraal if he was aware people may be offended by the menu, he responded: "Pretty much everyone [sic] of our customers enjoys the written menu as part of their overall experience and often express disappointment when items are removed with seasonal menu changes. But we appreciate the feedback and are actively considering it."

Customer reviews on Google express disgust in the "tone deaf" dish descriptions including one from a US tourist who says they will never return to a restaurant "with such a blatantly racist menu". Prominent Chinese lawyer Arthur Loo deemed the attempt at humour "a little bit sad in this day and age".

"I thought we had moved beyond this sort of thing," he said.

"From the pictures on their website, it doesn't look like the place that would resort to very juvenile humour (that takes the mickey out of the exaggerated Chinese accent).

"Good luck to them if they think calling something "YUM EE KOUW PATT" (or worse "EJA KU RAIT") is going to help them attract customers.

This isn't the first time restaurant owner Phillip Kraal has found himself in hot water over offensive language on one of his menus.

In 2009 the restaurateur described a chicken, brie and sweetcorn pie on his Crumpet Club menu as "slightly gay, I know, but oh so tasty".

At the time Kraal told the Herald he had been using his personality to write menus for 15 years.

"We serve the gay community just like any other group. You can't please everyone all the time though."

Kraal added: "I am flamboyant and fun just like the gay community - except that I am straight."

Last month Kraal made headlines again for a misleading gin ad from his Christchurch WHET bar.

The Facebook post read: "Public Health Message. Did you know that gin is one of the best natural remedy's for kidney and liver disease?

"Now this may seem somewhat ironic, however juniper berries, which gin is made from, help stop water retention in your body. Allowing you to pass more water than any other alcohol.

"This means that more harmful toxins and bacteria are flushed out your system. Get into WHET this week and start your liver recovery. Whet Drinking Room... Flushing livers since 2015. Please share."

The post lead to a complaint to The Advertising Standards Authority that was partly upheld and the post was removed, Fairfax reported.

This article was first published at nzherald.co.nz and was republished here with permission.