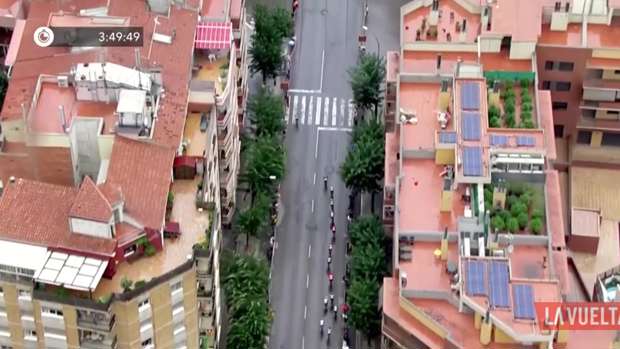 Spanish fans watching the Vuelta a Espana over the weekend were left shocked when two marijuana plantations suddenly appeared on their screens.

As a helicopter tracked the cyclists during the final moments of the eighth stage of the race, the birds-eye view shot panned over an apartment rooftop growing 40 marijuana plants spread out across two plantations.

Screenshots of the video, which was aired live, has since emerged on social media.

.@lavuelta helicopter 🚁 discovers a marijuana plantation on a roof of Igualada inside the last km of Saturday's stage. #LaVuelta19 https://t.co/eOu7rXfn8B pic.twitter.com/UTWUjrqwi7

Police say they have seized the plants which had reportedly been left abandoned on the rooftop and no one has yet been arrested.

In Spain, the law does not penalize the cultivation for self-consumption, but the regulations do not make it clear how big a 'homemade' plantation can be or how much cannabis can be grown legally.

Earlier today, Patrick Bevin fell short of becoming the first New Zealand cyclist to win an individual time trial at a Grand Tour during stage 10 of the Vuelta a Espana.

Bevin finished second on stage 10, just 25 seconds shy of claiming the biggest win of his career.

"I'm pretty disappointed, but Primoz Roglic has been the benchmark rider for time trials this season," reflected Bevin after the stage.

"Finishing second, I've been there before. I've sat in a few hot seats and had someone come over on top… It's bike racing."