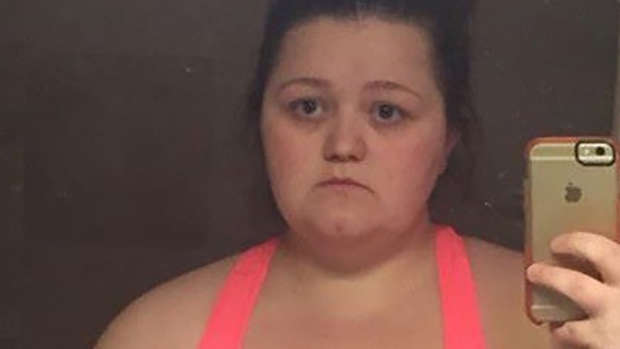 So instead of feasting on fast food takeaways every night, Bailey decided to try a paleo diet, where she avoided processed foods, dairy and grains.

By eating paleo Bailey lost a dramatic 55kg, going from 132kg to 79kg!

I often look back at what my life looked like at 300 pounds and am completely amazed at all the ways losing weight has affected my life today. There isn't one area of my life it hasn't touched in some way or another. I didn't lose weight so I'd have dramatic before and afters, to be prettier, to make anyone like me. It was because my life before wasn't a LIFE. I was miserable. I couldn't do anything. I didn't believe in myself. I lived my life in a way that just barely allowed me to get through the day. The growth that I've experienced in life since then is why I did it. The life I can live now is why I did it. Everything is easier, from the little things like getting out of bed, getting out of my car, hell, even doing laundry used to be hard for me. And to the big things, being an active participant in my life, not shrinking away or making myself smaller in rooms of people, taking chances I never would have before, having the confidence to know I really can do anything in this life I want to. I just hope that you know that you don't have to continue being confined to living a life you don't love or don't feel comfortable in. There really is a light at the end of the tunnel and you're not alone as you try to find it ❤️

"It hurts me now to think of how I felt about myself and how I treated myself before I lost weight.

"I was working at the hospital by this time and to get into work I had to walk two blocks from the parking ramp to the hospital building. I would be out of breath by the time I got there. Then I'd work all night caring for patients that were often there due to lifestyle choices.

"I realised that if I didn't change something, I'd be headed for a life destined for difficult medical complications too.

I got an email today about advice on binge eating. Most of you know my past history, or have read my blog post on my binge eating & food addiction- which was the realist, hardest post I've ever written. I don't have magic advice to give or a step-by-step guide for you, as much as I wish I did. What I do have is my personal experiences, my goal to help you with yours, & to make you feel less alone. Sometimes I feel like that's not enough, but it's what I have to give. If you're struggling, here's a few parts of my response. "You're 100% correct. Binge eating is like being an alcoholic. Except you can't get away from or be completely removed from food while in "recovery". It will always have to be in our lives. I've been working on it for 2 years & I'm not sure I'll ever be done. After having those behaviors & habits for 23 years, they don't just go away in 2. As much as I wish they did. Some things that DO help though are finding other habits that make you happy, occupy your time, make you feel good. I had to "fake it till I made it" with some of this. It sounded like a bunch of BS when I first started tbh. Like, there was NO WAY journaling, taking a shower, reading, etc. could make me "forget" about the food I was desperate for. For a long time it was me pretending to enjoy it instead of eating. Eventually it became habits and practices I like. That's really what a habit is, right? No one LOVES getting up at 6am, make breakfast, feed the cat for their morning routine, but after a while, they do come to enjoy it because it's comfortable, safe & familiar. That's the same way binge eating became a habit, & eventually was routine. You have the ability & the power to create new habits & routines though! Even if it feels silly and pointless, habits & behaviors and mindsets don't just show up. They get created. Not every day is going to be great & easy. Just because yesterday was free from binging, tomorrow may be different. Part of MY recovery was learning to accept that I can't change that, & being ashamed only made it worse. As hard as it is when it happens, start working on being accepting that it does & WILL & that will make it easier to move past it."

"I also felt like such a hypocrite and a bad example. I didn't want to be advocating a healthier lifestyle to patients but not living like it myself."

While Bailey began to lose weight just by changing her diet, she now loves kayaking, hiking, rock climbing and has even run a half marathon!

Now unrecognisable, she said: "Losing weight has changed my life in more ways than I can count.

"Everything is different. It's changed my goals, my relationships, my hobbies and my perspective."

One thing that's a struggle for me (and probably people like me who aren't up to par with societies standards of what a woman should look like) is that I can't go around with a sign on my forehead saying, "I've lost xxx amount of weight already, and I know I'm not perfect like *you*, but please don't put down all of my hard work by judging my body and giving "advice". It doesn't make me feel good. It's people like you that make me hold up my loose skin and imagine what I'd look like without my flaws. It's people like you that cause insecurities in the first place" I can't imagine being the kind of *perfect* person who feels like they have the authority to give unsolicited advice and point out whatever flaw it is that that person has. Like, to strangers. Like, in public. Or on the internet for that matter. It happened when I was 300 pounds and it happens now because my body still isn't what society (both men AND women) thinks is beautiful & "normal". I struggle with this more NOW than I did when I was heavier. When I was heavier & people told me things like, "you'd be healthier if..", "you can lose weight by doing xyz..", "you'd be more attractive if..", "YOU'RE a runner?!", "I'm not sure that size will fit you.." "you'd be cute if.." I was like, ok well this is super effing rude of you & you have zero right to say it but ok I get it I'm morbidly obese. But now people say these things to me not knowing what I've been through. Not knowing I lost 120 pounds by my damn self. Not knowing I not only look & feel better but am healthier than I ever have been. Not knowing I have been, I'm still and I forever will be trying to be better. It's frustrating to me that we can't just support each other and that no matter what, someone has something to say about the way we look if we're different from what they *think* a healthy person, a gym-going person, a runner or a women *should* look like. So a big reminder to people of the public- when you wanna give advice or opinions on a stranger's body- DONT. and a big reminder to those of us who don't have a magazine bod- you're still allowed to do YOU regardless of what a stranger says, back fat, bat wings, tummy rolls and all.

”I would tell someone to start slowly, it can be overwhelming to make a lot of huge changes in one day. You're more likely to give up if you're taking on too much at once.

"Also, remember to run your own race. Don't compare your progress with anyone else's and don't listen to anyone who says you can't do this.

"As long as you're making an effort, you'll also be making progress."

My Instagram turns 2 today! (I know that's a weird thing to celebrate, but bear with me) I'm throwing it back to this photo of a shirt I was still wearing when I first started this account. Since then, it's been YOU guys who've helped me get to where I am now. You guys who have cheered me on, cheered me up, and made this whole thing a hell of a lot easier and a hell of a lot less lonely. I am forever grateful. It's you guys who connect with me, give me a place to share what I'm now passionate about and give me a safe space of my own to be accountable, to learn and grow and be myself. THANK YOU. I was never expecting this silly social media account to change my life in the ways it's had, to bring me the best friends it has or the opportunities it has. Seriously, blessed and grateful is an understatement. I'm sometimes told that I inspire you, but guys, it's YOU that inspire ME. Love you & thanks for being here. ❤️