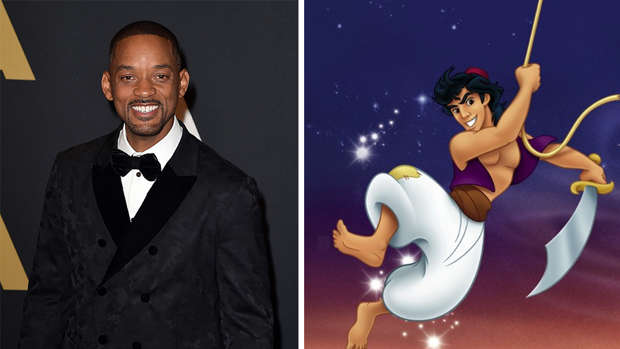 The first photos of Disney's new remake of Aladdin have been released this morning!

Entertainment Weekly released their new magazine cover, featuring artwork from the new remake on their social media and reaction hasn't all been positive!

It’s a whole new world! ✨Get an exclusive preview of Disney’s updated take on #Aladdin — plus new photos and scoop on #TheCrown, #KillingEve, #Hellboy, and more — in our magical First Look issue. Click the link in our bio for a sneak peek, and pick up the issue on newsstands starting 12/21. 📷: Disney

A post shared by Entertainment Weekly (@entertainmentweekly) on Dec 19, 2018 at 4:44am PST

A teaser trailer of the new film was released back in October and features some shots of actor Mena Massoud, who plays Aladdin in the film.

People aren't so sure with the film however, with some feeling that the Genie, who is played by Will Smith, should be animated.

Our very own Astley Nathan had a very fair point, saying that: "How is this going to work?! The Genie floats and comes out of a bottle!".

We can show you the world... of Disney’s live-action #Aladdin! Get a shining, shimmering, splendid first look at the reimagined classic in these exclusive new photos. Swipe 👈🏽 for a sneak peek, and click the link in our bio to see them all. 📷: Daniel Smith/Disney

A post shared by Entertainment Weekly (@entertainmentweekly) on Dec 19, 2018 at 6:07am PST

Will Smith has teased that their will be a definite hip-hop feel to the new remake of Aladdin. "I think it'll stand out as unique even in the Disney world. There hasn't been a lot of that hip-hop flavour in Disney history."

The movie will feature Naomi Scott as Princess Jasmine and Marwan Kenzari as Jafar.

READ MORE: The live action cast for Aladdin has been cast and everyone is freaking out at the hot lead Aladdin

The new live-action Aladdin is set to be released in 2019.

Who's pumped for this?!