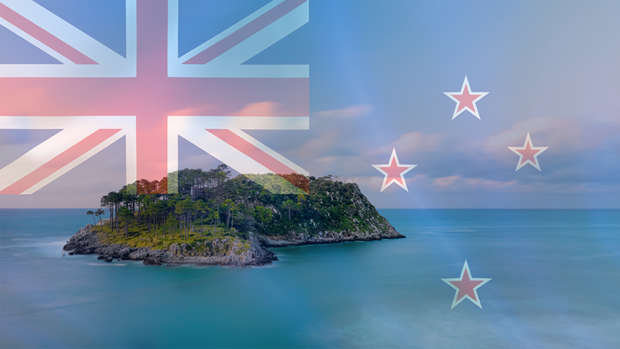 A Kiwi who drove past a "totally unclaimed, totally uninhabited" island in Australia almost daily with grand ideas of claiming it has done so, and says it is now New Zealand territory.

Located in the heart of Eildon in Victoria, Australia, the small island called New New Zealand Island was claimed by Jeremy Shanks and his five "bored" Kiwi friends.

What a day it has been. One of our great countries' citizens Nicholas Fausch has turned 25 years old and we have added approximately 0.1 squared kilometers to our countries boarders. Today, six pioneers, Lucy McRae, Liana Clark, Jeremy Shanks, Jacob Real, Tanika Brown lead by expedition leader Nicholas Fausch ventured into the unknown depths of the Eildon Pondage to discover and claim a thriving landmass for New Zealand. As decided by majority the team, the name of this island will be known as New New Zealand Island or NNZI for short. NNZI has multiple attractions such as it's thriving supply of mint, black swans and very slippery rocks. Jacob's landing is located on the North Western side of the island and is the location of where the very first New Zealander landed. Flag bay is located on the North North East side of the island and is the current location of the New Zealand flag - this location may change however due to incredible blackberry issues on the island, the summit is inaccessible. It is a truly exciting time in this islands history as there are still many discoveries to be had. A New Zealand flag was erected to ensure proper recognition of the island. To ensure New Zealand's laws are upheld, any visitors from other than Australia must apply through New Zealand's immigration website. https://www.immigration.govt.nz/new-zealand-visas/apply-for-a-visa The permanently visible landmass is currently unnoticed by Google however contact has been made to ensure that recognition of this lustrous landscape is upheld. Triangulation and satellite imagery has been used to pinpoint the islands location in the pondage to ensure the most accurate location. #newnewzealandisland @jacindaardern

"In my heart, it has been a plan for a few years."

"Every time I drive to work I see this island. This idea has been haunting me for quite a while now and it was a perfect day," Shanks told the Herald.

The land mass is not recognised on Google Maps or TripAdvisor, it has no name on local maps of Eildon, and was sitting there "for the taking", he said. For the time being the island would adhere to NZ laws, he said.

Australians were also allowed on without paperwork or a visa, but they did have to fill out a customs form on arrival.

Agriculture, slippery rocks and blackberries would be the island's main exports.

Now, waving proudly in the wind at the north-north-east side of the island, is the New Zealand flag.

A lot of locals were impressed after they had erected the flag, but that was because when they spotted it they thought it was an Australian flag, he said.

An unconfirmed source has told the group the island is actually called Snake Island.

NNZI has even sought comment from Prime Minister Jacinda Ardern about whether offshore visitors will need to apply for a visa to get on the island.

The small but humble island remains the sole focus of the group, who are planning future trips back to NNZI in the coming days.

"We're thinking of taking a few deck chairs over, a chilly bin, introducing maybe a few new species. That's far down the line though," Shanks said.

"We're thinking to maybe import a totara or maybe a rimu, and we'll move that onto the island to kind of signify it."