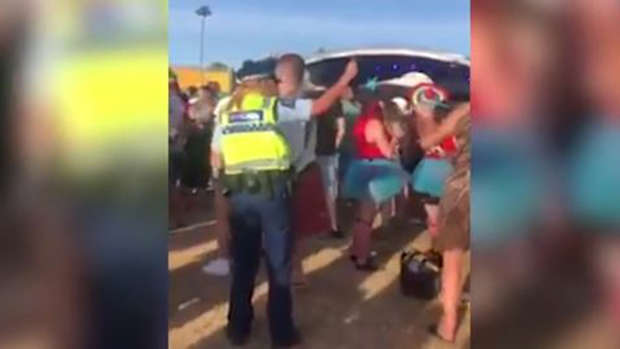 A Kiwi policewoman has gone viral after video emerged of her dancing while on-duty at a music festival in Hamilton.

The police officer, who was managing crowds at Mystery Creek's Festival One music show, was videoed dancing to Sons of Zion's Come Home with concert-goers while keeping an eye on proceedings.

Taking to Facebook, Waikato Police posted the video online with the caption: "Rate these moves out of 10 #WaitkatoPolice #SmoothMoves".

Punters were quick to praise the officer for being fun, approachable and mixing with the crowd while on duty.

"Best way to do ya job. Join in with the crowd," one wrote.

Another added: "Hard to make the moves whilst monitoring the madness.... Awsome multi-tasking.... This receives extra points."

Others decided to rate the policewoman's dance moves at the request of Waikato Police.

"How cool is that though. Free entry and cool vibes. That's definitely a 10," one said.

"When the bro realised she was a real cop and it wasn't a 7's costume," another joked.

It's not the first time New Zealand Police have made a splash on the dance floor.

In 2016, our police force made international headlines after releasing a video of themselves performing the Running Man challenge.

The twinkle-toed officers challenged police counterparts around the world to take part.