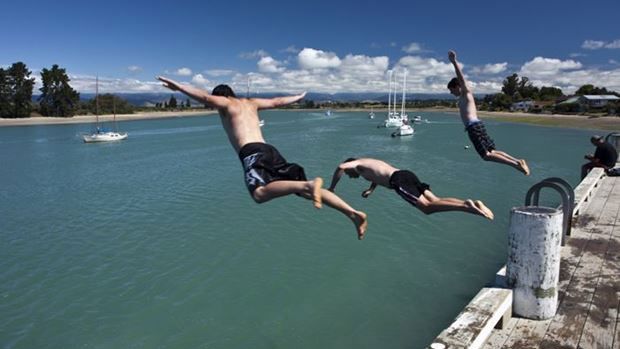 New Year's Day really isn't complete without manus, family, kai, manus, kai and mostly manus! So if you're hoping for some warm weather then you're pretty sussed fam!

And if you're heading out of Auckland, we've done our best to find the new years day forecast for wherever you're headed. Check it out below according to MetService.

Whangarei 25°- Further north, you may be dodging the rain but it'll be hot! A few showers. Southeasterlies.

Auckland 26°- If you're staying in Auckland, you'll be right! Partly cloudy. Southeasterlies.

Tauranga 25°- The sun will be out, just hidden behind a bit of cloud. Easterly winds.

Hamilton 26° - Again, no rain, just a bit of cloud mixed in with the sun. Light winds.

Hawkes Bay 28° - Hawkes Bay is set to be the warmest place on NYE. Although a few showers around.

Wellington 20° - A little nippy in Wellington for this time of year. Partly cloudy. Southeasterlies.

Nelson: 21°- Dayum, might need to pack a T-shirt instead of just the singlet. Partly cloudy. Southeasterlies.

Queenstown 22° - Partly cloudy. Light winds but at least you'll be dry. No rain in sight!

Dunedin 19° - Could be hoodie weather depending on where you're from. Partly cloudy. Northeasterlies.

The Sol3 Mio Breakfast may be moving on next year, but man they've given us some laughs! Listen to them talking about the red flags of driving below!