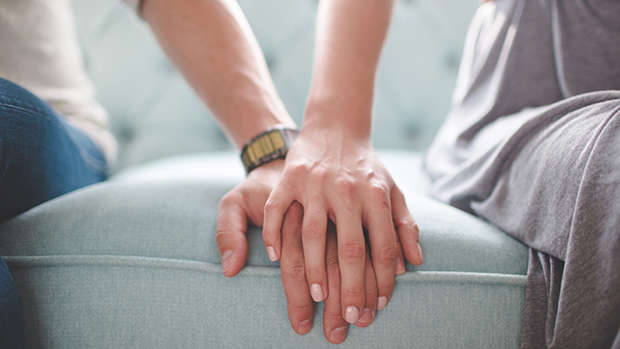 In a relationship and feeling miserable rather than happy? Not sure if you're in a relationship or not? Chances are some of these things are happening to you, even if you can't see it!

Once you're out of a bad relationship and look back, it's pretty clear it was never going to work and that you should never have put up with such bad behaviour.

But, when you're in the middle of something - emotional, vulnerable, involved and ever hopeful - it's a different story.

Whatever excuse your bloke has given you for not being the man you wish he'd be is rubbish.

Be brutally honest with yourself and act if you recognise any of the following.

Breadcrumbing means he's leading you on by feeding crumbs of affection that never lead to anything.

This is the guy who pops up on social media telling you how hot you are; he likes all of your posts, pops up to ask how your day is going, (if you're lucky) he'll even phone now and then.

But that's as far as it goes: push to meet in person and he's got every excuse going not to follow through.

Why he's doing it: He's already attached, he's testing to see if he can still pull like he used to, he enjoys a good flirt or he likes attention and the more attention he gives women, the more he gets back.

If he's not already involved, could also be the real life him is nothing like the online persona you're attracted to.

You'd be horribly disappointed if he did agree to meet (not that he ever will).

The rule: Try twice to make a definite date. If he wriggles out of both, move on.

HE DOESN'T ARRANGE ANOTHER DATE

You went out, got on really well, had a good old snog at the end of the date and then…nothing.

He'll answer you if you contact him but doesn't arrange to see you again.

This is when the female excuse system kicks into overdrive in an attempt to explain why: he's busy with work, he's going through a rough time, he's just come out of a relationship, he's shy, he's waiting for you to give him a big, green light, he's busy with work (and the list goes on).

Why he's doing it: He liked you, he had a good time, but not enough to want to turn it into a relationship. Simple as that I'm afraid!

The rule: If he wants to take it further, he'll ask you out again within a week. Trust me.

HE ONLY SEES YOU WHEN HE FEELS LIKE SEX

Do you ever see him when sex isn't possible? Is he around when you're sick and not up for it?

This isn't friends with benefits: that's an arrangement that can benefit both of you. This only benefits him.

Why he's doing it: He might not like you that much but he loves sex and if he's got it on tap with you, why wouldn't he take advantage?

The rule: Arrange some dates where sex isn't a given: the cinema or dinner with a reason why you can't go back to either of your places afterward. He won't go and will most probably be off when it's obvious you want more.

You'd think that being dumped and getting together, then being dumped again would stop you going there again – in fact, the opposite happens.

Intermittent reinforcement – unpredictable random rewards for the same behaviour – is one of the powerful motivators of all.

Gambling relies on intermittent reinforcement to create addiction and it's the same with relationships.

He's lovely to you, you feel amazing; then he treats you badly and you feel like hell. So the next time he's nice to you, you're so grateful it feels even more amazing – and so the cycle continues.

Why he's doing it: He's manipulative and likes seeing how far he can push you, he's not sure if he wants you or doesn't want you, he dates other people in the times he randomly disappears, you're his 'base camp' – someone he knows will take him back whenever he's been dumped and feels like being comforted.

The rule: Relationships aren't straight lines: of course affection dips and peaks. But if you feel like you're on a rollercoaster, get off.

Letting someone come back after one break up is fine – as long as the reason is justified and there is a solution to the problem.

Think long and hard about a second chance and break all contact after that.

Reliability isn't something we put on our partner wish list when we're young but it well and truly works its way up there as we get older (and wiser and wearier).

If he doesn't ring when he says he's going to, is never on time or doesn't turn up all, he's sending a clear message: you aren't important to him.

If you've called him on it and it continues, he's not just being flaky and unorganised, he just can't be bothered to make any effort.

Why he's doing it: Because he doesn't care about you. If he did, he'd do what he says he's going to and be where he's supposed to be.

The rule: Tell him your time is important and you won't tolerate him mucking you about by turning up late or not at all. One more strike and he's out. Stick to it.

HE HASN'T INTRODUCED YOU TO HIS FRIENDS OR FAMILY

I once counselled a woman whose partner of eight years hadn't introduced her to a single friend or family member.

He only ever came to her place, they only ever mixed with her friends and he only ever saw her Friday through to Sunday.

The excuses were that his family lived overseas (a lie), he didn't visit them because he didn't get on with them (another lie) and he didn't have any friends (he did and in the whole eight years didn't mention her existence once).

His case was extreme (he had uncurable intimacy and commitment issues) but the bottom line is the same: if someone likes you, they want you to be involved in all aspects of their life.

For most healthy, adjusted people, being introduced to friends and family means the relationship has the potential to be serious.

Why he's doing it: If he's not, the relationship isn't serious for him or he's embarrassed by you – or them.

The rule: It's hard to establish until you meet his friends or family but if he is punching above his weight and you're seriously out of his league (way better looking, more intelligent, wealthier, more educated), he could avoid introducing you for fear of you realising it.

If he's super attentive and affectionate and this is the only area that he's holding back, this might well be the case.

But if he's half-hearted about the relationship and you generally, don't kid yourself.

He's in it for the short haul.

YOU'VE BEEN GOING OUT FOR A WHILE BUT HAVEN'T HAD SEX

What excuse has he given you?

He doesn't want to rush into anything? He has a fear of intimacy? He was hurt badly in the past so nervous to 'move it forward'?

Come on, if he fancied the pants off you, he'd be ripping them off!

Why he's doing it: He really likes you but isn't attracted to you but doesn't want to hurt your feelings by saying that.

He could be hoping he finds you sexually appealing as time goes on but either way, it's not great for the ego!

The rule: If he's not wanting to sleep with you after a month, he doesn't want to have sex with you. Love without sex is friendship.

HE'S INVOLVED WITH SOMEONE ELSE

It's truly extraordinary the myriad of excuses people come up with to justify not getting rid of their current partner.

I don't want to upset the children, we own a house together, I can't afford to split, she wouldn't cope without me, who knows what she would do if I broke it off (do you want to be responsible for suicide?), I can't leave the dog, my mother would be so upset, she'll take me to the cleaners, her best friend goes out with my best friend.

Thing is, it if they want to be with you and they care a great deal for you, they will stop any other relationships they have going even if the split is painful and difficult (unless they want to be polyamorous and you agree).

Why he's doing it: He wants the novelty of a new relationship but the security of the old one. The old cake and eat it too.

The rule: Don't date people who aren't completely emotionally available. If you didn't know there was someone else (and seriously, do you want to stay with someone who didn't tell you?), they get one week to take action or you're off.

HE TREATS YOU BADLY

He's selfish, rude, condescending, flirts with other women in front of you, treats you like a maid, only calls you up when he's drunk or stoned, he's a financial leech, is verbally or physically abusive, puts you down – if your man is guilty of any of these behaviours stop making excuses and get out.

It doesn't matter what his background is, what problems he's dealing with, what's happened: if he's behaving like an b*****d, that's exactly what he is.

Why he's doing it: Because he's not a nice person, he has serious issues and no interest in sorting them.

The rule: No-one is perfect and we all behave badly now and then. But bad behaviour that's consistent and a pattern is bad news. Walk and don't look back.

Whether it's marriage or moving in, relationships need to move forward in order to survive.

If he refuses to talk about the future, won't plan anything more than a few weeks ahead and won't commit to moving in or marriage after years of being together, there isn't a future.

Why he's doing it: He might well love you but he's not in love with you.

How many men do you know who said they weren't interested in marriage while with a long-term girlfriend who meet, move in and marry the next one within mere months?

I know at least five!

It's funny how commitment issues seem to magically disappear when people meet someone that just does it for them.

The rule: Check with trusted friends or family that you aren't pushing too soon then make it clear what you want from him and ask when he will be ready. If he can't give you an answer, it's then up to you to decide how important that commitment is.