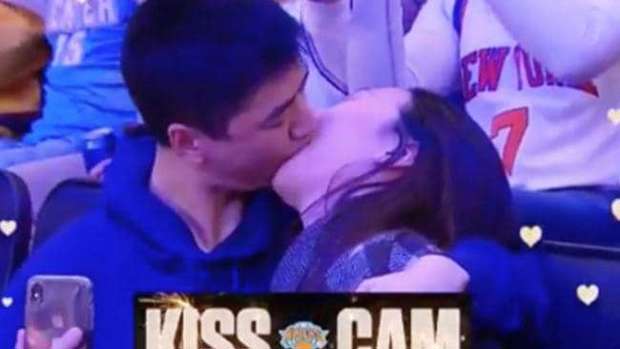 The male fan smooched his partner in a pretty graphic way, before documenting the session on his phone.

The moment went viral on Twitter, with people cracking up at the couple's intense make-out session.

One person said: ""If this game wasn't tough enough, they just showed a couple in full open mouth kiss for at least 10 seconds on the Kiss Cam. Get me out of here,".

Imagine recording yourself eating face at a Knicks game just to end up on the Kiss Cam. Ruthless. pic.twitter.com/RUNhFceYVC

Twitter also noticed a young boy behind the couple reacting to the awkward encounter.

LOL this poor child was traumatized at MSG and it wasn’t bc of the Knicks pic.twitter.com/U6vN0t0hMa

The Knicks won the game against the Trailer Blazers 117-93.