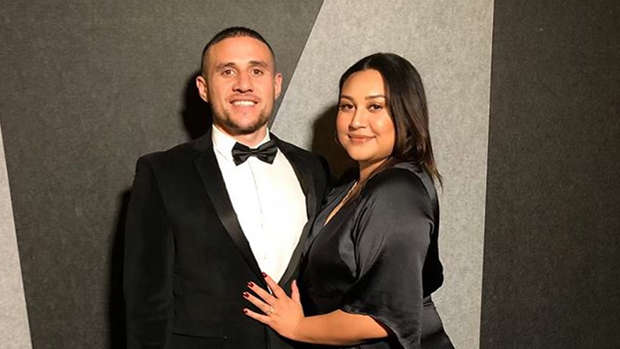 All Black star TJ Perenara and his wife Greer Perenara have taken the brave move to share the news that the couple miscarried last week.

Taking to Instagram, Greer revealed the couple were ecstatic a few weeks ago to find out she was pregnant and expecting their first child.

But just three weeks later they were hit with the devastating news, while TJ was on All Blacks duty.

However, despite wrestling with the decision of whether to go public about the miscarriage, the couple decided to announce the news, saying they felt obliged as other parents go through similar experiences.

I’ve been having an internal battle with whether I should share what I’m about to share, it’s very personal. I sat with it for awhile & after a conversation with TJ, knew I had to. I had to because it’s what I needed to hear while lying in bed sobbing uncontrollably. So here it is... TRIGGER WARNING: Miscarriage. We are all on our own path. We all have dreams, goals & experiences but more often than not, we DO share some of those with other people, whether we know it or not. In times when we feel alone, we can easily forget that there are others out there that are going through what we are going through. That can be a really dark, isolating time for some. A few weeks ago, TJ and I found out we were pregnant. We had been trying to start a family, so we were ecstatic after 3 positive pregnancy tests and confirmation through blood tests. Sadly, at our scan last week we found out that we had miscarried. We were absolutely gutted. All the typical questions arose “Why us?” “Did we do something wrong?” I know this topic is confronting & perhaps some won’t agree with me sharing it, but I’m sharing it because it’s important to know that we should not be ashamed. We should not hold the hurt alone. Miscarriages & complications in pregnancy are often so stigmatised that we are afraid to speak out & express our emotions which come with the loss we experience. But why? 1 in 4 have a miscarriage. It could be a sister, aunty, mother or cousin. It also affects our tāne. Why are we so ashamed to talk about something that so many experience? I felt like the only times I saw stories of miscarriage was when they were attached to a successful pregnancy story. I get that everyone is different and it’s up to the individual to share when and if they are ready, but I needed someone going through it. Raw and real. To speak out. To say “I am where you are. Still struggling. Still trying.” So, for those who are embarrassed, please don’t be, I am here too. For those who are feeling broken, your feelings are valid & I am there with you. For those who need to talk, speak to your friends & whānau, I am there too. If you’re frustrated, upset, just trying to keep going...(Contd. in comments)

In her post, she says it is important for everyone to communicate no matter how they feel and remove the stigma.

"Miscarriages and complications in pregnancy are often so stigmatised that we are afraid to speak out and express our emotions which come with the loss we experience. But why? One in four have a miscarriage. It could be a sister, aunty, mother or cousin. It also affects our tāne.

Despite the couple's tragic news, TJ has travelled to Perth after being named on the bench to take on the Wallabies on Saturday night.