After becoming known for calling people out on social media (including a Kiwi), 50 Cent has taken to Instagram falling head over heels for Serena Williams' latest cover shoot.

This week, Serena Williams unveiled her unretouched jaw-dropping cover for Harper's Bazaar August Issue presenting herself in the most authentic way possible.

50 Cent did not shy away from sharing his feelings about Williams' photoshoot, where he shared the magazine cover on Instagram with the caption "@serenawilliams put a lil bit of that a*s out there. 'Now Repeat after me say, God is good all the time'."

👀@serenawilliams put a lil bit of that ass out there. Now Repeat after me say, God is good all the time. 😏🍾#lecheminduroi 🥃#bransoncognac

Many of the rapper's followers quickly reminded him that Williams is married to Reddit co-founder Alexis Ohanian. The couple have a 1-year-old daughter, Olympia.

"She's married Fif but I'm not," one follower joked, but another disagreed saying "Respect a marriage."

Many other of 50 Cent's followers agreed that his caption was inappropriate with one fan saying "that's so rude, knowing that lady married", while another agreed "50 always complimenting somebody.. clearly has no respect for our marriage."

This is not the first time 50 Cent has taken his personal thoughts to Instagram. In June, 50 Cent brutally called out Kiwi Mongrel Mob member Puk Kireka.

UK newspaper the Sun published an article based on Kireka's interview with the Herald headlining "MOB JUSTICE Gangster with 'Notorious' tattooed across his face moans he can't find a job".

Then 50 Cent fired his shot, publicly commenting on Kireka's facial tattoo by posting a screenshot of the Sun's article to his Instagram.

"What the f*** is really going on man. I wonder why he can't get a job," the rapper wrote. 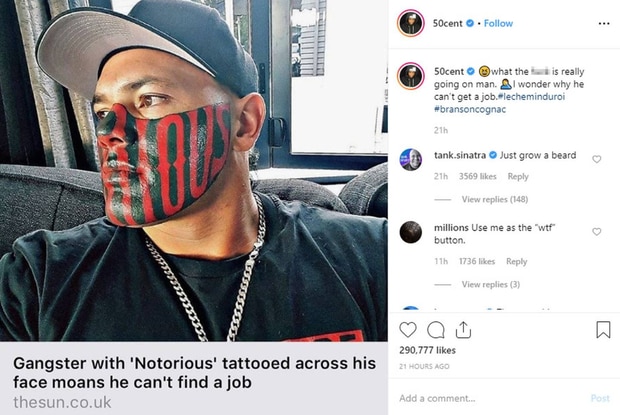 50 Cent is making a name for himself for publicly shaming people on social media.

In April 2019 he viciously joked about jailed rapper Tekashi 6ix9ine giving up information on detained British-born rapper 21 Savage, in an attempt to reduce his own sentence.

In a now-deleted post, 50 Cent accused Tekashi 6ix9ine of snitching on 21 Savage. He was labelled a "rat" and has since lived with the nickname "Snitch9ine".