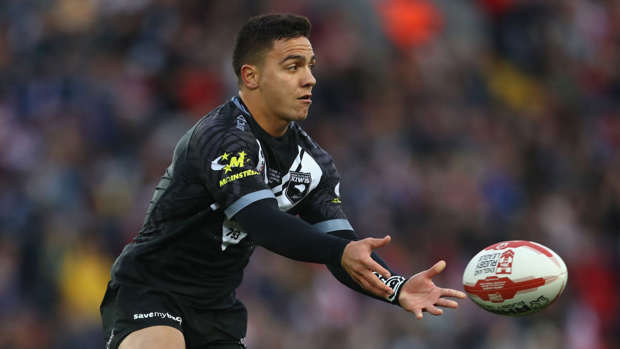 Kiwi international Kodi Nikorima is to join the Vodafone Warriors immediately after being snared from Brisbane through to the end of the 2021 NRL season.

Vodafone Warriors chief executive Cameron George confirmed the Palmerston North-born 25-year-old Nikorima would be in line to make his Vodafone Warriors debut when they face St George Illawarra in the NRL’s inaugural Magic Round at Suncorp Stadium in Brisbane on Saturday, May 11 (5.30pm kick-off).

“We couldn’t be more excited to secure a player of Kodi’s calibre, especially at this stage of the season,” said George.

“We’ve been patient in watching the player market for some time. Peter O’Sullivan and our recruitment team have done a terrific job in securing Kodi, who will certainly add value to our club.”

Nikorima joins the Vodafone Warriors after making 86 appearances for the Broncos, the last of them in last Saturday night’s 29-6 win over Cronulla. In his rookie season in 2015 he was on the bench in Brisbane’s golden point grand final loss to North Queensland.

A Kiwi debutant the same year, he has now played 13 Tests, starring at halfback in the Kiwis’ 2018 end-of-season internationals against Australia and England. He was the man of the match in the 34-0 third Test win over England at Elland Road in November.

“Kodi will bring a lot to our club with his ability and experience,” said Vodafone Warriors general manager football Brian Smith.

“He’ll also be a huge help around the club in helping to mentor our young halves.”

Nikorima will arrive in Auckland this weekend and will be at Mount Smart Stadium to watch the Vodafone Warriors take on Newcastle on Sunday.

With my move now official I want to thank a few people...firstly to Paul and Anthony for understanding and accepting my wish to take on a new challenge at the @nzwarriors . To all of the @brisbanebroncos staff, past and present, during my time at the club. To the boys - we have shared so many good times. I am sad of course to leave but know our relationships will continue long after we have hung up the boots! To the Bronx Nation - your support throughout my career has been outstanding and means so much to me, thank you! This club has given me so much & I will be forever grateful for that. & most importantly my partner and FAMILY who have supported me through all the highs & lows in my career so far 🙌🏾 Looking ahead now I can’t wait to get across to the @nzwarriors A new chapter, a new adventure and a footy club I have always had a massive affection for. Can’t wait to meet all of you and get started!! #WeAreWarriors

“I’m really excited about coming to the Vodafone Warriors and moving to Auckland,” he said.

“It’s a new challenge after being at the Broncos for so long but I’m looking forward to working with the coaching staff and the players. I like the direction the club is heading in and it will also be good to be around a lot of familiar faces, both the coaches and team-mates.

“I also want to thank the Broncos for the opportunity they gave me to develop as a player. The club has been a huge part of my life and I’m grateful for the way so many people supported me there.”

Throughout his NRL career, Nikorima has demonstrated his utility value. Used off the bench in his first two seasons, he provided options in the halves as well as at hooker and fullback. Since then he has been used mainly at halfback but has also started at fullback.